Not enough “Bern” and not ready for Hillary 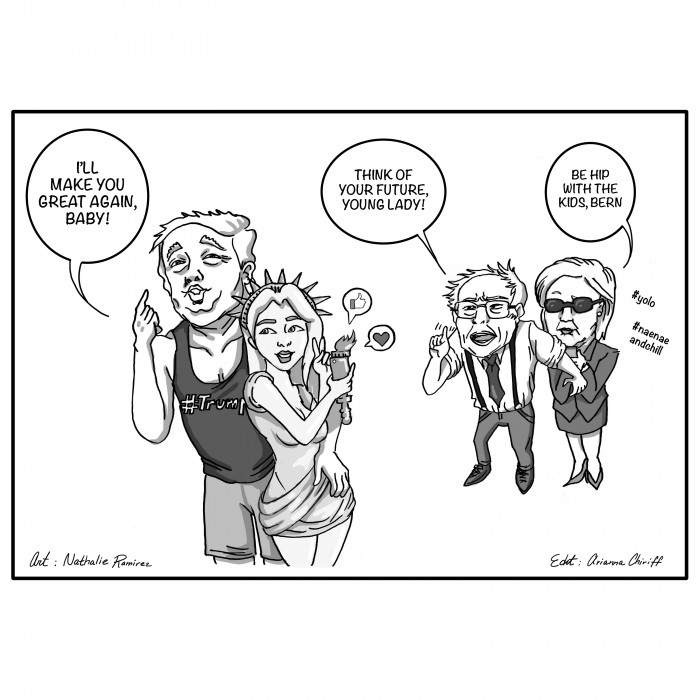 If you were expecting political clichés or mention of other countries as examples of free education or longer paid maternity leave, then watching CNN’s first Democratic presidential debate for 2016 would’ve been a typical conversation.

The debate resembled a roast to every candidate, moderated by Anderson Cooper with questions that felt like they were based off of Reddit or some other online forum, most definitely Facebook, where trolls can freely practice the First Amendment. However, the camera just loves both Bernie Sanders and Hillary Clinton!

These two were nothing but broken records, constantly repeating themselves on what they stand for which is expected. Sanders having to clarify the term “democratic socialism” and how he’s a progressive candidate and Clinton quoting clichés such as “the wealthy pay too little and the lower class pay too much,” “equal pay for women” and “fathers can say to daughters ‘you can be president.’”

One thing that can help grant Clinton any respect is that she can earn the display of not giving up. Who would’ve thought eight years ago that she could have won in the Democratic Primaries against the snazzy Barack Hussein Obama? And it’s clear that after Tuesday’s debate, she continues to hope one day to become the first female president, as she so subtly mentioned throughout the debate.

I’d give her flack for that. It should not be viewed as giving up, despite the insults and constant reminders of suspicious emails, and questioning her potential as a leader for the United States of America. She was criticized by the media for being too emotional when she ran against President Obama. If showing any human qualities such as laughing or crying will damper someone’s campaign, then we might as well elect a robot.

Other than a roast not hosted by Comedy Central, Tuesday’s debate can also be summed up into a short overlook of each candidate, of course just Sanders and Clinton…and maybe Jim Webb, the Virginia senator who served in the United States Marine Corps during the Vietnam war.

I get it. Clinton wants to reach out to the youth with her “celebrity status.” Look at SNL. To break the news to her – like many youngsters have done to their parents that try to be hip instead of just being adults – is not how someone should appeal to a group of young adults that are facing student debt, a small job market and confusion towards reproductive rights as well as the right to bear arms.

Instead of stooping to the level of millennia’s form of communication such as tweets, likes, selfies and Facebook posts, candidates must encourage the youth to put their electronics down for a bit and analyze the cause for such debt when they finish college or why they aren’t guaranteed jobs in comparison to their parents or grandparents.

Donald Trump, Republican candidate and television star, makes use of his narcissism to get his point across mainly for shock value and tabloid while Clinton says anything that everyone wants to hear. It’s hard to decipher whether she’s trying to either win the primaries or become prom queen.

It’s one thing to do more than just address the issues, but it’s another to just be a pushover in order to get “likes” from groups that were mentioned: women, minorities, the LGBTQA community, and Planned Parenthood supporters. Basically anyone that Trump insulted, Clinton taking the opportunity to make herself look better.

The clarification that Sanders must always address is not liberal nor socialist, but progressive. Sadly, despite his own long and continuous battles against congress regarding rights for the common man, his dreams exceed reality.

Candidates and host alike had to remind the Vermont senator that the economies in countries like Denmark are not in the same boat as our own economy. I’m also certain that they had to remind him to take his medication during the breaks in between the debates.

The set-up for the platform on the democratic debate was definitely staged: to get Clinton and Sanders next to each other.