A village between red walls 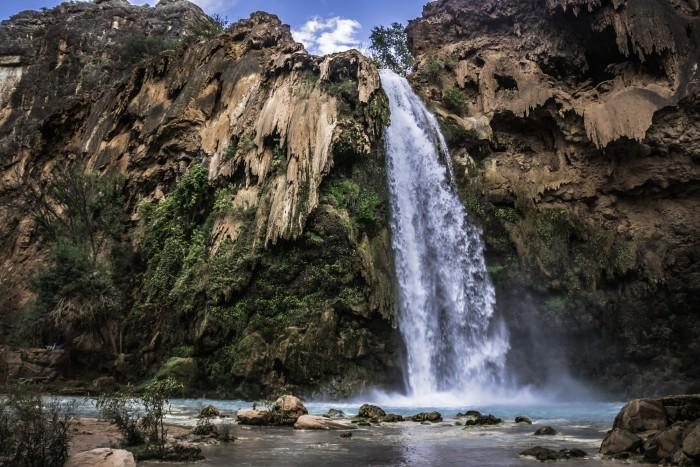 The waters of Havasu Falls crash into a pool of turquoise thundering through the canyon. Photo credit: Justen Christensen

What makes Havasu Falls worth the quest is not just its dreamlike setting, it is that instant in which you first set eyes upon its marvel, or when you first plunge into its cool waters.

Witnessing the turquoise waters of Havasu Creek cascade almost 100 feet below you or diving into one of its many azure pools below is a moment in a continuum.

On the Havasupai Reservation, there is a small village nestled between sheer walls of red rock in the depths of the Grand Canyon.

The cost to enter Havasupai is $35 per person plus a $5 environmental fee, and the cost of our stay at the lodge was $140 per night, totaling $320, not including gas and food.

We were a group of young adults looking for an adventure with no expense limitations, but by using websites like Free Campsites we were able to find places along the way to spend the night at no cost.

Supai is nothing more than a cluster of houses, a small school, a small church, a cafeteria and a lodge, encased by a cloud of dust kicked up by the mule trains trudging back and forth between the campsites and the trailhead.

If you continue down the trail eventually you will reach the spirited waters of Havasu Falls.

On our first night we pitched our tent in an expanse of desert under a canopy of stars in Joshua Tree. The next night we stayed in a forest bordering the Grand Canyon where we walked with elk among the pines of the Kaibab Forest.

We traveled along stretches of the historic Route 66 where we stopped to eat and created memories that cannot be recreated at a Motel 6, Budget Inn or even the Ritz. Eventually we made it to Hualapai Hilltop where the journey continued for another 10 miles canyoneering through rocks and crevices along the midpoint of the Grand Canyon.

The day we left, we made our way down the canyon past Havasu Falls, through an opening in the rock wall that lead to a series of steps carved into the rock and wooden ladders wet with mist from the falls.

At the bottom of the descent, we found Mooney Falls, where we swam and dove for an hour or so before going off and exploring a slot canyon on our way to Beaver Falls.

Unfortunately, we never made it to Beaver Falls because the cerulean skies which we had begun the day with were overtaken by gray ominous clouds issuing a downpour as we made our way further down the trail. It wasn’t raining hard, but we feared the worst with the memory of the hikers who recently perished at Zion National Park as a result of a flash flood lingering in our minds.

We dropped our packs close to Mooney Falls and unsuccessfully attempted a trail run to Beaver Falls but decided to turn back in the end.

We decided that this was reason enough to return one day, as if a reason were necessary.