Men’s soccer can’t close out first half, loses to CSUF 1-0 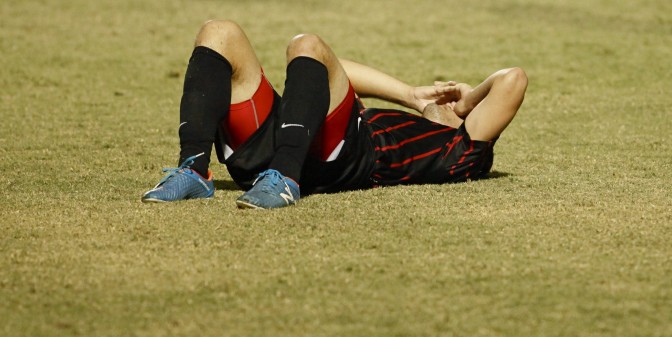 A goal allowed by the Matadors late in the first half wound up being the difference against the Titans. Photo credit: Juan Pardo

The Matadors started the game strong on both sides of the field, but had a defensive lapse in the final minute of the first half that ended up being costly.

In the 44th minute, CSUF senior forward Nigel Patterson found the back of the net after the ball bounced towards him off a deflection and got it past CSUN senior goalkeeper Adam Hobbs.

Before giving up the goal, CSUN had several chances to take an early lead but were unable to take advantage of them.

CSUN senior midfielder David Turcios had an opportunity to score when he beat his defender to the ball after a pass from sophomore forward Dean Wright, but he was blocked at the last moment by another defender.

Turcios and Wright missed another chance a couple minutes later when Turcios passed to an unready Wright and the ball went out for a goal kick.

Those missed opportunities proved to be the closest the Matadors would get to finding the equalizer as they were unable to match that same energy in the second half.

“Very low level tonight. I thought we were poor with the ball. I thought our energy was low; Fullerton out-hustled us tonight,” CSUN head coach Terry Davila said after the game. “You have to be good with the ball, the game is all about the ball. If you don’t take care of the ball, forget about it. We were terrible with the ball today.”

Besides giving up the goal, the first half was tightly contested as both teams took five shots and had two shots on goals.

But in the second half, the gap was more apparent as the Matadors only took one shot while the Titans took four.

The pace of the second half was controlled by CSUF as the Matadors struggled to get the ball on CSUF’s side of the field.

Although their offense was struggling to find a rhythm, CSUN’s defense was able to keep the game within reach.

The Titans almost scored twice in the second half, but Patterson’s header and junior forward Edgar Rodriguez shots were both deflected.

“Everyone is trying to do their thing and play by the coach’s system,” said CSUN freshman defender Jumoke Hutton. “And it’s difficult to lose at home, but we’re trying our best.”

The second half saw the Matadors constantly trying to get back possession but when they did, they couldn’t do much as CSUF defense held their ground.

Trailing late in the game, CSUN got aggressive — going after the ball, attempting a late rally, but committed fouls in the process.

For the game, the Matadors were overzealous, committing 14 fouls, while the Titans only had seven.

The Titans halftime adjustments paid off as CSUN struggled to counter their game plan and couldn’t reestablish their style of play.

“It was tough, I think we were expecting a different game plan,” said CSUN junior midfielder Juan Samayoa. “It was a tough loss.”

With the loss, the Matadors missed an opportunity to tie for first in the Big West Conference South Division with the Titans.

Securing a playoff spot now gets tougher for the Matadors as three of the last five games are on the road.

The Matadors will try to make a postseason push as they head back on the road to play the University of California Riverside Highlanders 7 p.m. this Saturday, Oct. 17, at UC Riverside Soccer Stadium.