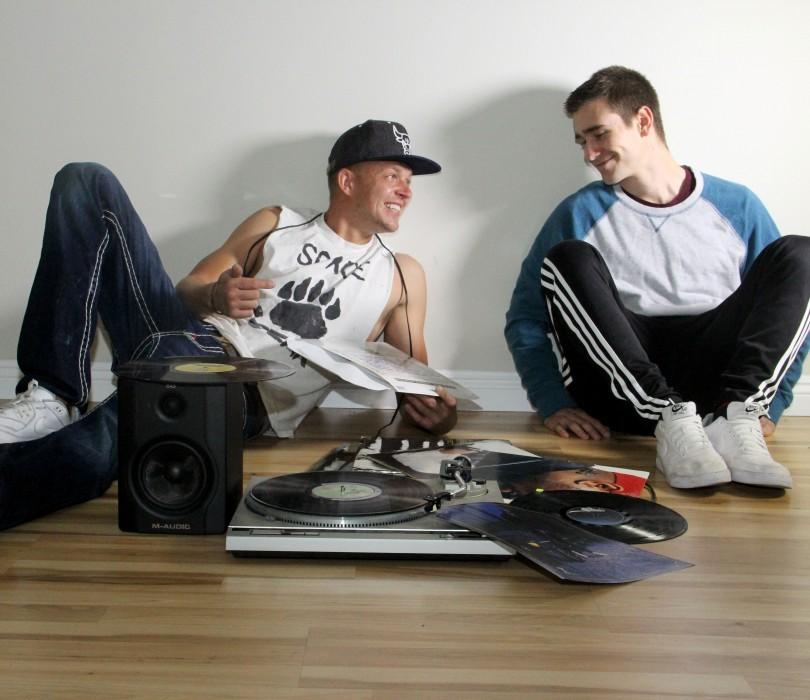 Space Bear, made up of friends Ignas Ramanaukas, 27, (left) and Quinn Cooper, 23, (right) have been making music together since 2012. Photo credit: Lauren Gates

With many local artists around the San Fernando Valley, the Sundial has created Valley Vibrations, and ongoing search to discover up and coming artists just outside of our campus.

As you walk into the first hallway of Space Bear’s house in Van Nuys, their edgy yet dreamy track, Dirty Muffin, leaks through the crack at the bottom of the door. As the track grooves along it pulls you into a world of unusual sounds such as a whirling washing machine and clanky percussion, that are delightfully placed throughout the composition in a clever way.

Space Bear, made up of friends Quinn Cooper, 23, and Ignas Ramanaukas, 27, have been making music together since 2012. They first met at a mutual friends party and later got together to collaborate on a new hip hop project. The duo went on to produce hip hop instrumentals together and after a few years established Space Bear as their electronic music title.

What are both of your musical backgrounds?

Ignas: I grew up listening to a lot of hip hop music. I began free-styling and writing raps in middle school. I had no formal musical training but I always had a good ear for music. I started to teach myself electronic music production and got set up to work at home.

Where do you find your influence from?

Both: We are influenced by the broad spectrum of music we have both grown up listening to. We’ve been influence mostly by electronic dance music (Quinn) and hip hop (Ignas). We find our music to be a somewhere between the two genres. We don’t really try to fit into any particular genre. We do what we like to hear which is heavy drums, slappy snares, deep house bass, atmospherical soundscapes and effects, and something you can dance to.

How did you come up with the name Space Bear?

Both: Space Bear visited us one warm night in January. He touched down on our roof when he arrive on earth like buzz on Andy’s bed. Since we were his first human friends he blessed us with a lifetime of good music and showed us around the universe. We’ll be forever grateful for what Space Bear has done for us. His one mission for earth was to spread good music and love to all people and he has left that duty in our determined hands.

What is your favorite track so far?

Both: Our favorite track is “Dirty Muffin”. It’s a classic. It is one of the first tracks we made together. It has a heavy drums, clanky oddball percussion, an old dusty sample of this guys voice from an apollo lunar vinyl, and some Hawaiian native type of folk chanting nicely. Oh and a washing machine sample at the beginning. It really feels like your most euphoric space cruise fantasy.

How would you describe the style of music you have been creating? Describe your creative process.

Both: Right now we’ve been making each song like a story. They have themes and sounds to set the scene. We’ve been having fun creating with that in mind. We like our songs to have humor in them because we want people at our shows to be entertained and have a good time. We usually build drums first. We pull sounds from our sample library and create a couple funky drum grooves. From there we add vinyl samples, live recorded sounds from our library, bass and instruments etc. We work when ever we get the chance. We like to work together but sometimes Ig will start a beat on his own or Qu and then we’ll begin working on the track together.

What project are you working on right now? What can you tell us to get excited for this track?

Both: We’re working on an EP right now that is gonna be about 5 tracks. We’re excited about Flippin Chickens, Jackie Chang, and Frumundacheez.

What are your goals as a group?

Both: Our goals are to play shows with all original music under the artist name Space Bear. We plan to begin expanding locally and move out across the globe. We are most excited about playing the festivals we grew up at and touring internationally.

Who is your favorite artist at the moment?

Both: We don’t have a single favorite but some current influences are Major Lazer, Jack U, Freddie Gibbs, Gucci Mane, Shlohmo, Flying Lotus

You both have studios in your rooms describe what its like to be able to work from home, does that influence your style?

Both: We get to work at any time of the day. Its completely comfortable and convenient to work on music. Ig’s rooms is set up more like a vocal both and has a great feng shui for creating while Qu’s room is set up and treated to be a mix room.

You guys use some cool and unique samples in your songs.

Both: Thanks, we get our vinyls at FreakBeat records on Ventura. We also have a huge library of sound for movies. It’s a lot of live recorded found sound and every kind of object you can imagine. It’s fun to use those because they add a different characteristic to the music beyond our relatively typical music sample packs.

Ignas I know you grew up in Chicago, has living in the Valley influenced your music?

Ignas: Living in LA has given me more creative freedom. I’m able to live a life fully submersed in music. The weather and energetic environment is motivating to my self and creative process.

Check our more from Space Bear on Facebook and Sound cloud.