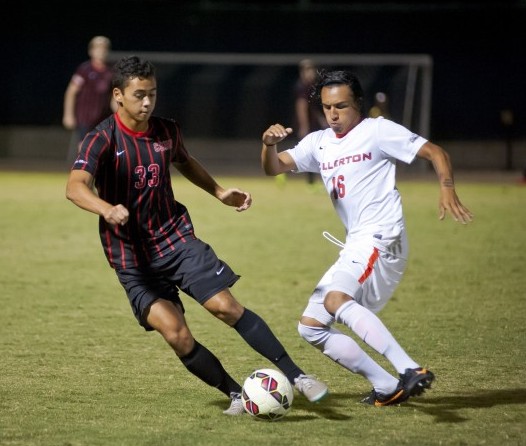 After both the Matadors and UC Riverside lost conference games on Wednesday, both will be looking to bounce back.

The Matadors kept their second place spot in the Big West South but are now tied with UC Irvine after they was able to defeat UC Riverside on Wednesday.

UC Riverside dropped to last in the conference after losing their third straight game in conference play.

UC Riverside has scored two or more goals in all of their wins this season and are led by two senior forwards, Noberto Ochoa and Michael Salazar, who have combined to score 13 of the team’s 18 goals.

Ochoa and Salazar are second and third in most goals for the Big West, so they will be a priority for CSUN’s defense which has had 10 games where their opponent has scored one or less goals.

The Matador defense will look to senior goalkeeper Adam Hobbs, who leads the Big West conference in save percentage and is second in total saves, to stymie the UC Riverside attack.

Gonzalez leads the Matadors with four goals on the season and Wright is tied for third for most assists in the Big West with four total.

UC Riverside has their own answer to the Matadors offense in sophomore goalkeeper Vincent Morales who is second to Hobbs in save percentage among Big West goalkeepers.

Both teams will be desperate for the win as Cal State Fullerton is running away with the Big West South.

Fullerton is up by two games and have already beat CSUN once this season, meaning the last five games of the regular season are crucial for CSUN’s postseason hopes.

The players to watch for this game will be the two top tier goalkeepers in Hobbs and Morales. It will be up to them to slow down the offense and keep their team in the hunt for first in the conference.

Offensively, look for CSUN sophomore midfielder Steven Manios, who leads the team in shot total, to test Morales with his high volume of shots.

For UC Riverside, a player to watch for is junior midfielder Romario Lomeli who has one goal on the season but is tied with Wright with four assists on the year.

What could make a difference in the game is the high amount of fouls UC Riverside commits, which could help the Matadors to victory if they are able to capitalize.

The two teams will face off Saturday at 7:00 p.m. at UC Riverside.