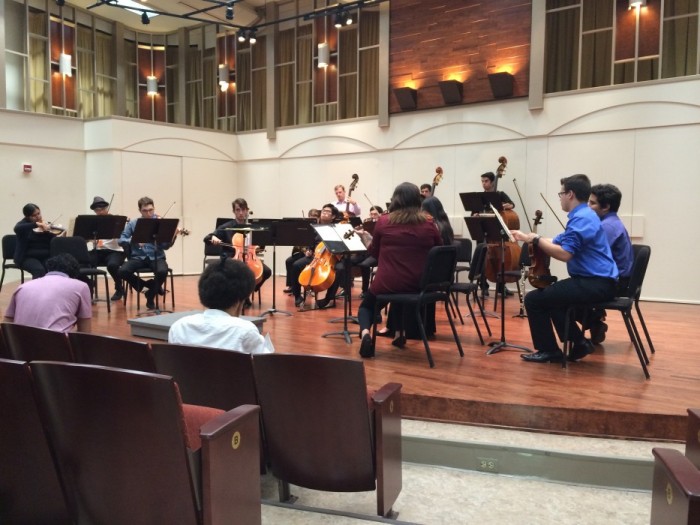 The CSUN Symphony Chamber Orchestra warms up and tunes as they get ready to start their concert Thursday night. Photo credit: Breanne Foster

The CSUN Symphony Orchestra put on a concert unique for the ensemble. They split the orchestra in half, forming two chamber orchestras, one of which performed last night, Oct. 15; the other will be performing selections of an opera next week.

“We have four different conductors, each getting their master’s degree,” said Dr. John Roscigno, orchestral conducting professor and head of percussion studies. The conductors each come from a different background; one is a violin player, a couple are composers and one has even studied internationally.

“It’s nice to see the grad students, what they’ve been working on,” said Anja Nichols, sophomore music major. “It finally paid off.”

The chamber orchestra noticeably followed each conductor precisely, even with the different conducting techniques. Audience members could hear the ensemble perform the stylistic variations dictated by the conductor. These variations in interpretation made the similar pieces sound distinctive.

“I loved how they tried to interpret the era,” said freshman music major Demetrio Escobar.

“Stamitz composed more than 50 symphony pieces,” Zhou said. “Not many are around today. A music editor took pieces and created a full score.”

“As a conductor, I’m going to decide how to present it to everybody,” Zhou said.

Even with a small group of eight violins, two violas, three cellos and three basses, and a few wind instruments, they filled the room with a full sound.

This symphony was one of two to feature natural horns in the ensemble, which look like French horns without valves. The horns added a nice texture to the strings, even if a couple of notes cracked or didn’t quite reach the right note.

The second symphony of the night was Sinfonia No. 8 in G Major by Christoph Willibald Gluck.

Kuyumjian conducting matched the style of the music, emphasizing the difference between the staccato sections and the legato sections.

The next song, Symphony No. 1 in F Major by William Boyce, was conducted by graduate student Mehran Tebyani, who received his bachelor’s in composition from CSUN and studied under famous musicians in Iran.

“[Boyce] was born in [1710], almost at the end of baroque,” Tebyani said. “At that time, the orchestra was very small, this size,” he indicated to the ensemble behind him on stage. “Just a string orchestra and some woodwinds. This piece has two flutes and two oboes.”

“Thank you Dr. Roscigno for giving us a chance, this concert, to perform this music,” he said. “I hope you enjoy symphony number one.”

Tebyani looked very much at home standing in front of the orchestra in his tailcoat. His conducting was smooth and relaxed, emphasizing dynamic changes.

The flutes and oboes added another dimension to the piece, twisting their layer of sound into and around the sound of the strings.

The final song of the night was Symphony No. 1 in D Major by Franz Josef Haydn, known as the father of the symphony. This symphony was conducted by first-year graduate student Laura Asenas, who graduated from California Lutheran University with a Bachelor of Arts in music performance for violin and teaches strings in Conejo Valley.

“I got to [teaching] middle school age and need to learn more about conducting,” Asenas said. “A passion developed from there.”

“Haydn was a prankster; it comes out in the playfulness of his music,” Asensas said as she described the piece she was about to conduct. “The first symphony starts pretty fast and upbeat, then it goes into what I like to call a casual stroll with Mary Poppins. Then it’s light and upbeat — finish it off with a bang.”

Asenas looked like she was born to conduct on stage. Her movements were smooth but sharp, showed the differences in dynamics and in articulation, and cued different sections at the appropriate times.

Throughout the performance, the musicians continually got more into what they were playing, moving with the music.

The ensemble blended so well, it sounded like a string quintet with two violins, a viola, a cello and a bass. The balance was exact; the bass and cello laying a solid foundation for the higher instruments and filling the room with sound.

“It was lovely,” Nichols said.