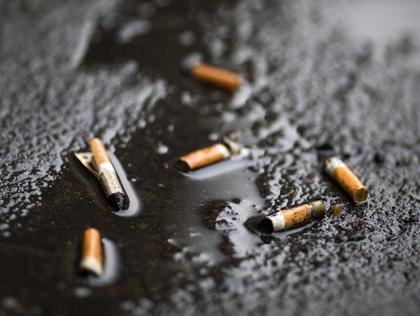 Cigarette butts are seen in a gutter on January 9, 2012 in Paris. A Paris law will ban next summer smokers from throwing their butt in Paris streets at the risk of paying a fine of 35 euros. Each year 350 million cigarette butts are thrown on public highway, which represents 315 tons of wastes . AFP PHOTO / JOEL SAGET (Photo credit should read JOEL SAGET/AFP/Getty Images)

Governor Brown signs legislation that calls for 50 percent of the state’s electricity to come from renewable sources by 2030,

A study says that sex and violence are not the ideal context for effective advertising.

California State University-Northridge is leading the effort to digitize ten thousand document related to the internment of Japanese Americans during World War Two.

Cigarette butts are the most littered item in the United States, and the Westwood Village Improvement Association is tackling the huge problem.

A report shows an increase in film and television production in Los Angeles.