Matadors on two-game win streak, will take on Hawaii 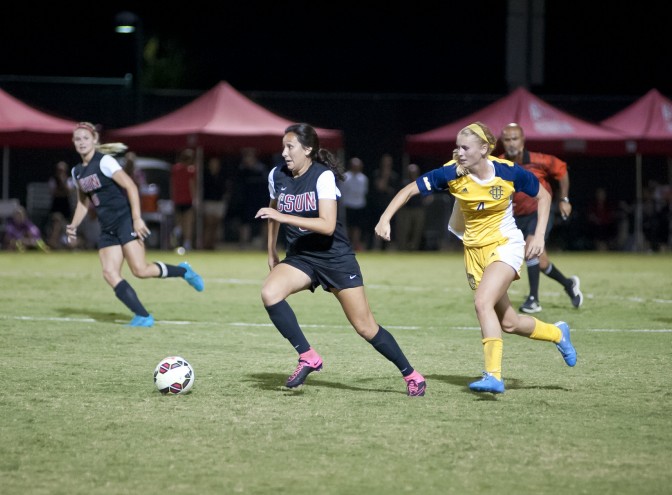 After a mediocre ending to non-conference play, the Matadors are looking for their third victory in four conference games when they face Hawaii on Sunday. Photo credit: David Hawkins

Currently on a two game win streak, the CSUN women’s soccer team will hit the road to take on the University of Hawaii Rainbow Warriors on Sunday.

After ending in a 0-0 draw against the University of California, Davis Aggies in their Big West Conference opener on Oct. 4, the Matadors have reeled off a couple off victories improving their record to 9-5-1.

They are in second place in conference play and fourth overall.

Powered by standout sophomore forward, Cynthia Sanchez, the Matadors pulled off a 2-0 victory over the University of California, Irvine Anteaters on Oct 8. Sanchez scored both goals and set a school record for most goals scored in a single season. She currently has 11.

They followed it up with a 2-1 victory over the California Polytechnic State University, San Luis Obispo Mustangs. Both Sanchez and junior midfielder, Kourtney Kutscher contributed goals in the win.

Sanchez has 22 shots on goal this season, and is converting at a 59.5 percent clip. Kutscher is second on the team in goals scored with four.

The Matadors defense has also been strong, led by senior goalkeeper, Cynthia Tafoya. She has 36 saves on the season and is fifth all time in saves in school history.

While the Matadors are averaging 1.87 goals per game, they are holding opponents to 1.27 per game. They are also averaging 14.9 shots per game while keeping the opposition at 11.7.

Hawaii comes into the match having lost four straight games and is winless in conference play. The Rainbow Warriors currently sit at the bottom of the conference at 3-10-1. Their last win came on Sept. 24 against Brigham Young University, Hawaii.

They are led by sophomore forward, Dani Crawford who has scored three goals this season.

Defensively the Rainbow Warriors have struggled this year. They are averaging 1.07 goals per game, but are allowing opponents to score 2.50. They are also being outshot by their opponents, 14.6 to 13.3.

The Matadors bring with them a 3-4-1 record on the road, while the Rainbow Warriors hold the same record but at home.

CSUN will look to add to their victory total, but the last time the Matadors faced a struggling team on the road, they lost 4-1 at the University of San Diego on Sept. 25.

Kickoff for Sunday’s game is scheduled for 8 p.m.