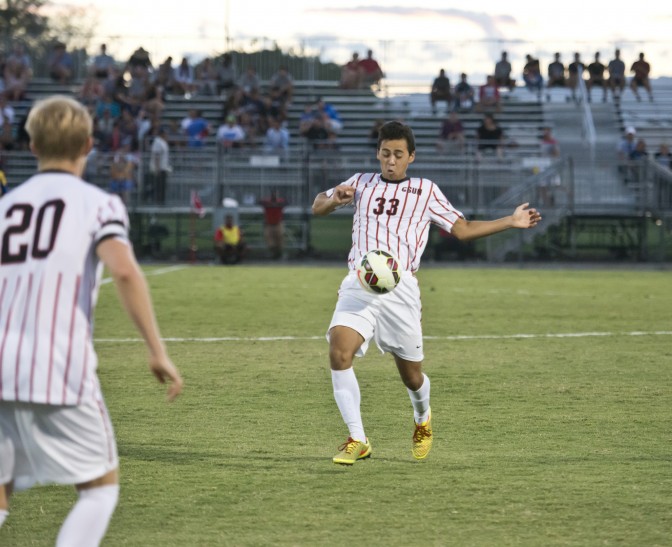 Although the Matadors had difficulty creating scoring chances, they proved to be more adept at finishing, scoring the only goal in a 1-0 victory against UC Riverside. Photo credit: David Hawkins

However, UC Riverside came out aggressively, tallying a total of seven shots by five different players in the first half alone, but the accuracy was not there for the team.

Out of the seven early shots, senior goalkeeper Adam Hobbs only needed to save one.

Early offense for the Matadors was somewhat nonexistent, only having one shot by senior midfielder David Turcios, and it missed the goal, wide right.

Going into halftime, both teams played excellent defense but it seemed UCR had the momentum based on the shot opportunities it had in the first half.

Coming out at the half, Riverside still looked primed to put points on the board, but Hobbs was able to show why he is one of the best goalkeepers in the conference by immediately shutting down the Highlanders’ offense.

He made another save in the first two minutes of the second half.

Despite Hobbs defensive heroics, the Matador offense still struggled to get shots off early in the second half.

Turcios was able to get two more shots but good defensive play from UC Riverside kept his shots away from the net.

Two more saves from Hobbs and great defensive play all around from CSUN kept them in the game, which opened up the gates for senior midfielder Carlos Gonzalez, who was able to capitalize on the only opportunity CSUN had all night.

Junior midfielder Nicolas Camacho was able to get the ball past the UCR defense and thread it right to Gonzalez in front of the net.

Gonzalez wasted no time and was able to put the ball in the back of the net to give the Matadors the 1-0 lead at the 67th minute.

Down by a only a goal, the Highlanders did not give up in the remaining minutes. UC Riverside junior defender Stephen Copley almost scored on a header from a corner kick but it hit the crossbar in heartbreak.

The Highlanders wouldn’t get another opportunity that impactful, and the Matadors closed out the game 1-0 to keep them in the hunt for first place in the division.

The Matadors will look to continue climbing the standings in their next match at Cal State Fullerton at 7 p.m. on Wednesday.