The Fab Faux Revive the Beatles At VPAC 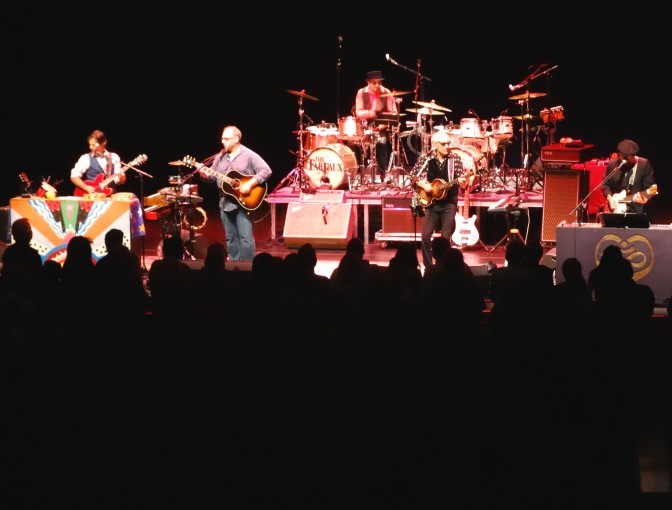 The Fab Faux gets the VPAC crowd on their feet during The Beatles' "She Loves You."

More often than not, Beatles cover bands appeal to those alive when the Fab Four were playing on the Ed Sullivan Show or those who like to imagine that the Liverpool lads are still at it.

With the Fab Faux – musicians who are veritable Lennon and McCartney experts – a performance melds the best of both antiquated and modern sensibilities in a performance transcending merely covers and encompassing a literal interpretation of the classic songs.

“It’s refreshing to see a Beatles cover band that isn’t just the gimmick of dressing up like them,” said CSUN alum Larry Green.

The performance by the Fab Faux encompassed a span of years from 1964 to 1966, with material ranging from Please Please Me to Rubber Soul.

“These two shows have so much outstanding material within them,” said Fab Faux bassist Will Lee. “We’re so excited to help bring you back to the shows.”

Concertgoers were up on their feet from the very beginning of the performance, clapping and dancing along to “I Want To Hold Your Hand” and “Can’t Buy Me Love.”

Playing on such Beatles-infamous instruments as Rickenbacker guitar and Hofner bass, the Fab Faux further gave the air of inhabiting the oeuvre of John and Paul without attempting to become them wholly.

Though the crowd was generally comprised of folks who were likely teenagers when The Beatles were in their prime, it certainly didn’t stop them from letting loose to the songs of the night. Many parents and grandparents brought their children and grandchildren to the show, nudging them along when a particularly popular song was being performed.

“I think it’s important to educate your kids and your grandkids about the older music,” said Green. “The Beatles, The Stones, all the old guys. They need a solid musical education.”

The band played songs featured in both the Hollywood Bowl and Dodgers Stadium shows in an order perhaps most conducive to cutting a rug inside the VPAC. With regards to historical accuracy The Beatles may not have followed a tune such as “Help!” with “Roll Over Beethoven,” Los Angelinos got the special treat of a finely turned set list courtesy of the Fab Faux.

The Fab Faux, featuring Late Night with David Letterman’s bassist Will Lee and Conan O’Brien bandleader Jimmy Vivino, focused on delivering an accurate musical homage to the Fab Four rather than trying to imitate them visually and vocally.
Joined by rich Pagano on drums, Frank Agnello on guitar and Jack Petruzelli on keys, The Fab Faux was so sonically cohesive, it was a wonder they didn’t pen the classic songs themselves.

“To replicate those songs, they’ve got to have a real good understanding of how music works,” said Studio City resident Barbie Parkers. “(Musical) arrangements like that don’t just come out of thin air.”

The crowd had an especially fine time singing along to The Beatles earlier hits – “She Loves You” and “All My Loving” were among the most celebrated – as did they cheer to deeper cuts like “She’s A Woman.” There wasn’t one song that fell flat or that met lesser enthusiasm than another – the Fab Faux could seemingly do no wrong.

“It was like being back in front of my television,” said Parkers. “I was screaming and almost crying, this music just always gets to me.”