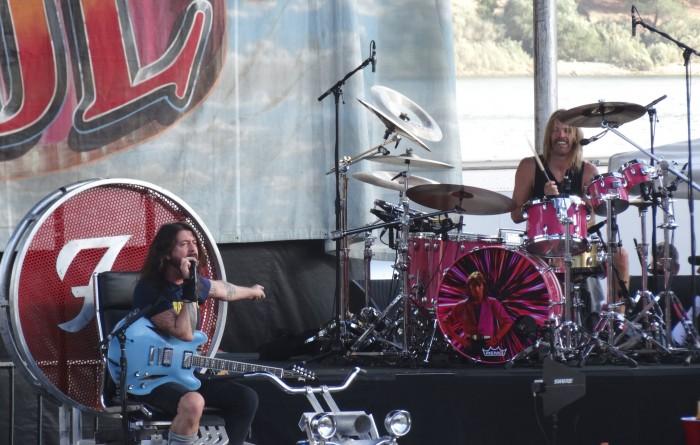 One need look no further for the most rock n’ roll show that October can offer than Foo Fighters performance at the 32nd annual Love Ride benefit concert on Sunday.

For the final installment of Harley Davidson’s “Love Ride” at Castaic Lake, Dave Grohl and company pulled out all the stops for a set of Foo Fighters classics and classic rock standards in the afternoon’s final set.

“Seeing this is the final Love Ride, we wanted to make our set as rock as possible,” said Grohl. “We’re gonna do as many songs to get you up on your feet as we can.”
Foo Fighters played to thousands of Los Angelinos on Sunday afternoon, sending off Love Ride into its twilight hour with an exuberantly excited audience.

Playing the usual set of “Everlong,” “The Pretender,” and “My Hero,” the Foos also surprised the crowd with a fair amount of favorite rock songs from over the decades, culminating in a frenzied dance party to the musical legends.

Though all patrons were welcomed – motorcyclists or not – a great deal of the day’s themes were centered around motorcycle lifestyle and culture. Motorcycle displays, exhibits of models and professional stunts were featured all throughout the activities of the day.

To keep with the theme of the day, Dave Grohl’s on-stage throne was outfitted with the front half of a chopper as he sat during the set due to his sustained leg injury.

“I used to ride bikes out in Virginia where I grew up,” said Grohl. “This is as close as I’m going to get it at this point in time.”

Following the sets of all-veteran based group American Hitmen and punk legends Social Distortion, Foo Fighters played such rock classics as Queen’s “Tie Your Mother Down,” Rod Stewart’s “Stay With Me” and Tom Petty’s “Breakdown.”

Foo Fighters drummer Taylor Hawkins provided quite a few of the vocals for the covers in the set, both drumming and singing or resigning his position to a guest musician such while taking center stage.

“In a lot of ways it seemed like Taylor Hawkins was Dave’s frontman,” said California State University Northridge Music Industry alumni Lorenzo Pertusati. “I didn’t mind it, I thought he was great – he just seemed like Dave’s anchor during those songs.”

Though the covers performed by The Foos were well received, the original songs were wildly appreciated, causing bikers and casual concertgoers alike to throw up their garb and run into a pulsating mosh pit in front of the stage for “Times Like These.”

It was a sight to behold a grizzled biker and a neon-clad hipster clamoring to the stage for the same music. Perhaps in any other setting such an occasion would be unheard of.

“This event and especially this music seems to bring everyone together regardless of background,” said Lake Hughes resident Kathy Mills. “I’ve never seen so many folks getting together that wore such different clothing.”

The festival, which benefits the Wounded Warrior Project, was also largely themed around honoring those who served in the United States Army. With interludes between sets honoring local veterans and a performance Iraq Veterans American Hitmen, Love Ride saluted all veterans present.

Foo Fighter’s classic “My Hero” was especially poignant as one of the last songs of their set, a clear nod to the benefit at hand.

“I think it was an excellent way to end the afternoon and the series of Love Rides,” said Pertusati. “I’m upset I won’t be coming back.”