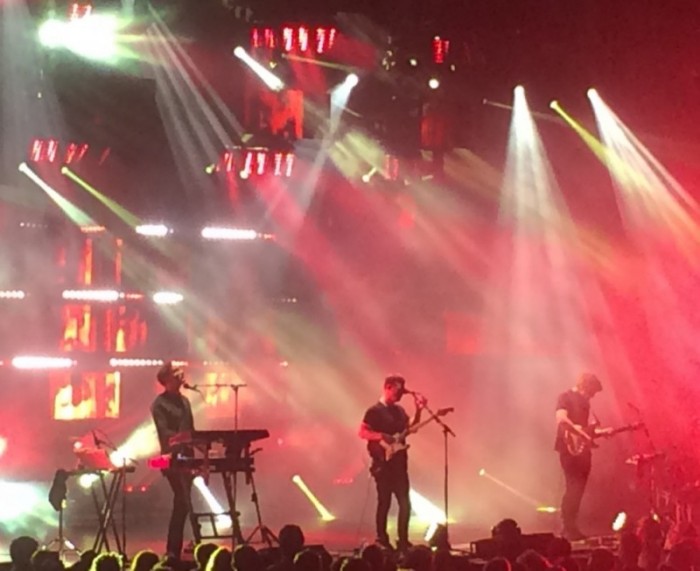 There was nothing a bit short during alt-J’s performance at the Hollywood Bowl on Oct. 15 of pleasure, especially in their song “Fitzpleasure,” when all four members were silhouetted against a backlight of yellow light and multiple LED flashing screens. The packed venue went silent to listen to the strong falsetto vocals and electronica feels.

The crowd clapped along to the folk song with the keyboardist and when vocalist Joe Newman sang, the colorful light show aligned with the music that spanned the arched stage.

Alt-J, a band named after the triangle symbol made by hitting the “Alt + J” keys on a Mac computer, left fans entranced with their churcky vocals, upbeat drums and guitar riffs.

The British indie rock band’s impressive musical precision made up for the lack for stage performance. The members hardly moved on stage and looked stiff, but that aside, they were insanely good live.

Keyboardist Gus Unger-Hamilton was the most outgoing member on stage. He smiled and thanked the fans for attending.

“This is the first place [Los Angeles] in America we ever played. It’s something special,” Unger-Hamilton said to the crowd.

Sounds like the a capella-intro “Interlude 1,” along with early hits like “Dissolve Me” and “Tesselate” left the audience enthralled.

Alt-J picked up the pace with “Left Hand Free,” and “Every Other Freckle.” The songs gave a powerful bass that shook the outside venue.

The 2012 love song “Matilda” began my obsession with the band. They didn’t perform it at Coachella – so hearing it live was a highlight.

The band members, all dressed in black skinny jeans, struck a cord with a hipster college fan base and kept them on their feet the entire set.

The band wrapped up with the sensually-suggestive vibes of “Fitzpleasure” around 10:30 p.m., but quickly returned for a four-song encore.

“Taro” and “Breezebocks,” one of the group’s best-known track, were both crowd-pleasers. Everyone sang along to the tralala’s of the song. The hauntingly beautiful song stirred the crowd into a swarm of dancing festivalgoers.

The Hollywood Bowl performance was the last 2015 California show before alt-J heads to Europe. Seeing them perform outside a big-name festival is worth the ticket.