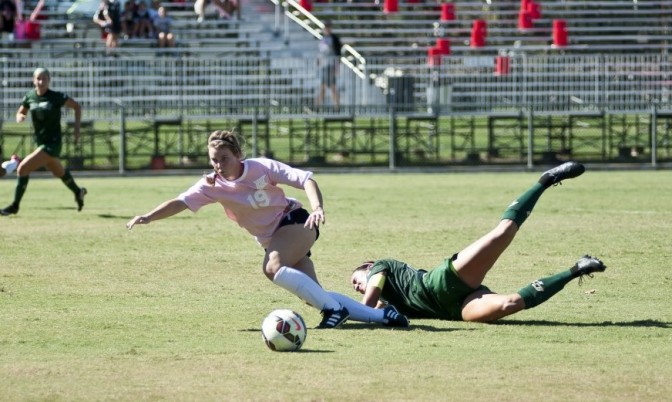 After their third straight victory, CSUN moved within 2 points of first place in the Big West. Photo credit: David Hawkins

After being unable to capitalize on early opportunities, CSUN junior forward Breanna McCallum would score the go-ahead goal in the 51st minute, her first of the season.

Assisted by senior midfielder Lyndsey Preston, McCallum got the ball inside the box and found the back of the net with a low shot towards the corner.

With the assist, Preston now has three assists for the season and is tied for most with the team.

Although the final score indicates a close game, the Matadors controlled the pace of the game for the most part as they dominated the first half.

CSUN had two corner kicks within the first seven minutes and almost took the lead in the 23rd when sophomore forward Cynthia Sanchez’s shot went over the crossbar.

CSUN would take four shots in the first half while the Rainbows were unable to get a single one.

However, the second half saw a tighter game plan by both teams.

Unable to get a shot off in the first half, UH came out aggressive and outshot CSUN 9-7.

While she didn’t face any threats in the first half, CSUN senior goalkeeper Cynthia Tafoya had to withstand the Rainbows attacks as they tried to find the equalizer in the second half.

The Rainbow Wahine got their first shot of the half inside of the first three minutes, when Tafoya was able to save Hawaii sophomore forward Sonest Furtado’s shot.

Both goalies ended the game with four saves.

As the second half was more competitive, Preston would almost score to give CSUN a comfortable lead.

Trying to answer Hawaii’s attack, Preston was able to get two shots within a three- minute span but both attempts would be saved by Young.

Hawaii tried for a late rally as they took two shots and had a corner kick in the last three minutes but CSUN’s defense would finish the game strong.

The only category the Rainbows had an advantage over the Matadors was in corner kicks, with five compared to the Matadors three.

The team is now on a three-game winning streak and come back home to host the California State University Long Beach this Thursday at 7 p.m. at Matador Soccer Field.