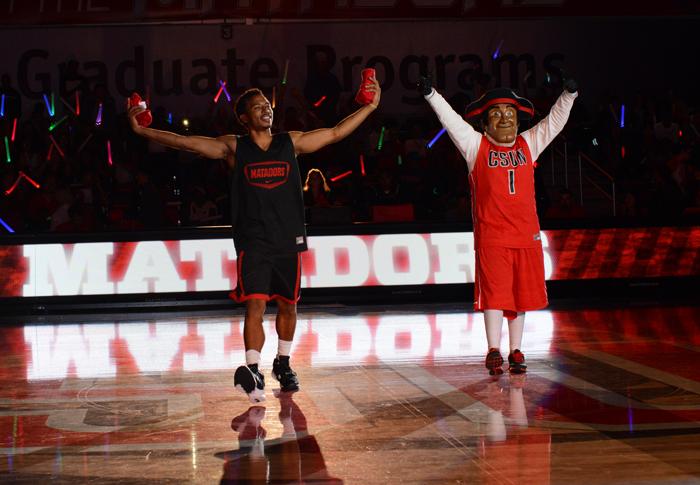 Freshman guard Kelton Conway before tries to pump up the crowd with Matty the Matador. Alejandro Aranda / The Sundial

As the lights dimmed in the Matadome, hundreds of CSUN students swayed and cheered, which left CSUN women’s basketball freshman guard Nautica Morrow in awe and timid during Matador Madness on Friday night.

“At first I was shy,” said Morrow, referring to individual player introductions. “But then my teammates did it, so I wanted to do it.”

Unlike most basketball games, and sporting events in general, Matador Madness provides both students and basketball players with more personal interactions with their peers.

“It looked like they were normal people, average students having fun, so that was nice to see them,” said Patrick Nelson, a senior business management major. “I felt like I could relate to the team.”

Although the event may be a popular draw for students considering the free gifts and food that were provided, the event was a refreshing experience for the players as well.

“This way they feel hands-on, they feel like really involved,” said CSUN men’s basketball freshman guard Jason Richardson. “On campus you could say hello; you can only do so much. Out here you’re dancing with them, shooting with them. It’s just a different feel.”

In addition to a more intimate experience between fans and players, the event acts as a way to signal the beginning of the basketball season, as well as a tool to encourage attendance during the season.

And in terms of how Matador Madness did in that department, it seems to have proven to be an effective tool.

“It encourages me to come out and actually watch them,” said Ananna Felicity, a sophomore child development major who is new to CSUN.

Embedded within the dance contest, shooting contest, trivia and scrimmage was a fundamental goal to bring CSUN closer together through the basketball programs.

“If they are connected to you, if you are connected to campus, the campus will support you,” said CSUN men’s basketball head coach Reggie Theus. “So I think this is what it’s really all about.”