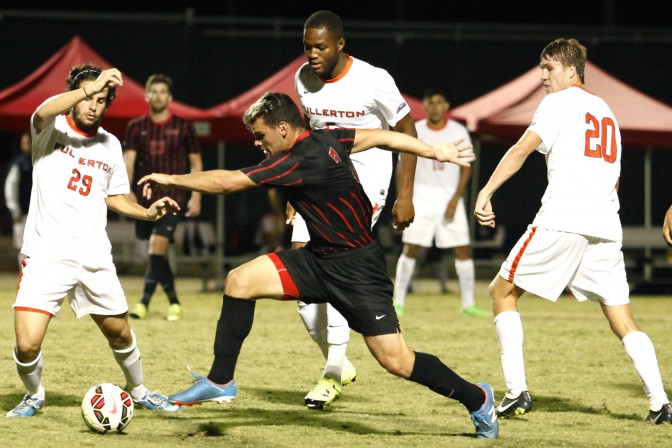 After losing to the Titans last week, the Matadors travel to Fullerton in search of some revenge. Photo credit: Juan Pardo

In a tie between the top two teams in the Big West Conference South Division, CSUN (6-6-2, 1-3-1 BWC) will return to Titan Stadium on Wednesday, Oct. 21 to break a winless streak against California State University, Fullerton (9-5-1, 4-1-1 BWC) that date backs to last season.

CSUF senior forward Nigel Patterson scored the only goal in the team’s first meeting of the season on Oct. 14.

CSUN kept it a tight game in the first half and equaled CSUF’s tally of shots with five apiece. But the Matadors’ offensive prowess dwindled, getting outshot 4-1 in the second half, 9-6 overall.

“I thought we were poor with the ball. I thought our energy was low; Fullerton out-hustled us tonight,” CSUN head coach Terry Davila said after last Wednesday’s game against Fullerton. “You have to be good with the ball, the game is all about the ball. If you don’t take care of the ball, forget about it. We were terrible with the ball today.”

Track back to nearly a year ago at Titan Stadium and Davila faced the same obstacles. It only took 19 minutes for the Titans to break the deadlock last season.

“Fullerton taught us a lesson: how to be physically tough,” Davila said on Oct. 23 in Fullerton. “You got to be able to put your body on the line and I don’t think we’re willing to do it. We chased the game and I think we gave the game away.”

Big West Defensive Player of the Week David Elias will be CSUN’s biggest challenge once again for his heroics against UC Irvine, recording his ninth shutout of the season. Elias is ranked eighth in the nation in shutout percentage (0.60), and sits on back-to-back clean sheets.

Senior winger Carlos Gonzalez will look to build on scoring against UC Riverside over the weekend and improve on his team-leading five goals for the season.

With four games left in the regular season (including this one), the Matadors will be in pole position for the Big West Tournament with back-to-back home games. Currently sitting in second in the South Division, a win for CSUN will surely be a boost for the Matadors to come out of the division with a playoff berth.