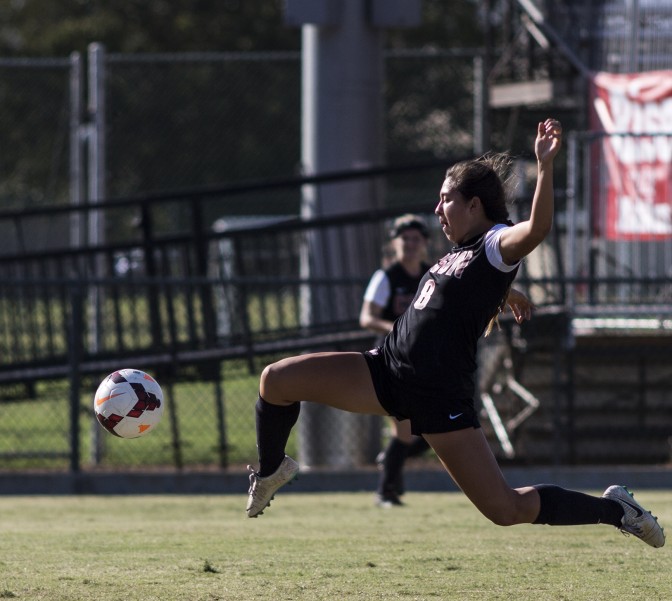 The Matadors, who are undefeated in conference play, look to defeat the Long Beach State 49ers, a team that has wins against multiple national-ranked teams under their belt. Photo credit: File Photo/The Sundial

Coming off a 1-0 victory over the University of Hawaii Rainbow Warriors on Sunday Oct. 18, the CSUN women’s soccer team will face a different sort of challenge.

The Matadors next match is Thursday, Oct. 22 against the California State University, Long Beach 49ers who at one point were ranked as high as 23rd in the nation.

Everything has been clicking so far for the Matadors since they entered Big West Conference play. Since their Sept. 27 loss to Texas Tech University, they have one draw, and have reeled off three straight wins.

The Matador’s defense continues to be strong, with two of those three wins—against the University of California, Irvine and Hawaii—being shutouts.

While the Matadors are still led offensively by sophomore forward, Cynthia Sanchez, they continue to get scoring help from multiple players. Junior forward, Breanna McCallum scored the lone goal of Sunday’s win and became the 12th different player to score a goal this season.

While Cal State Long Beach is currently on a two game losing streak and is only 3-2 in conference play, they are not a team to be taken lightly.

Although they have dropped out of the National College Athletics Association rankings, they are still a formidable team with a couple of signature wins this season.

They defeated the University of California, Los Angeles on Aug. 21 when the Bruins were ranked 4th in the nation. They beat the California State University, Fullerton Titans who are leading the conference at 4-1 in conference play, and 12-2 overall.

The 49ers also managed to play the University of Southern California Trojans, who are ranked 24th, to a draw.

They are led offensively by sophomore forward, Ashley Gonzalez who is tied for fourth in the conference in goals scored with seven, along with University of California, Riverside senior forward, Tyler Cunningham.

Defensively, the 49ers are powered by junior goalkeeper, Ashton McKeown who is fourth in the conference in saves with 50. She has a save percentage of 84.7 percent.

The 49ers are looking to get back on track while the Matadors are trying to keep their current win streak going.

Kickoff is scheduled for 7 p.m. at Long Beach State.