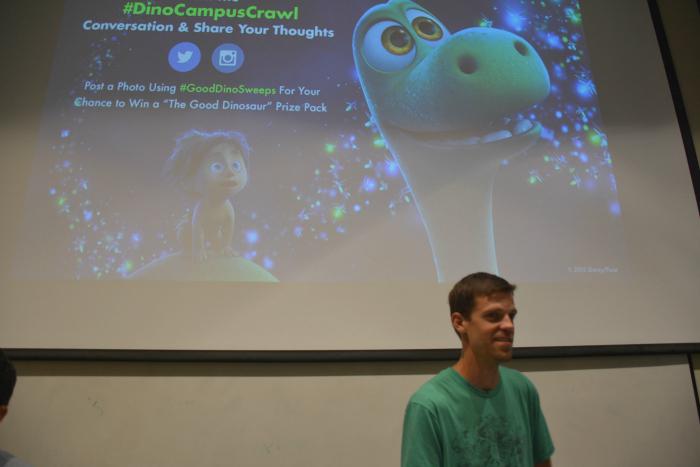 Pixar Animation Studios' animator and character art director Matt Nolte gave CSUN animation students an insight into the industry and a preview into the new film "The Good Dinosaur." Nolte visited CSUN on Oct. 21 as part of his #DinoCampusCrawl.

A Pixar Animation Studios’ animator and character art director gave the campus insight on his creative illustration process and a sneak peek at his newest film.

Nolte gave the presentation and students a sneak peek at some of the film. Attendees learned about the background art and animation work that Nolte and his team used to produce “The Good Dinosaur.”

Nolte has been a part of Pixar since 2004 and has worked on films such as “Cars,” “Ratatouille” and “Brave.” His most recent work is “The Good Dinosaur” and “Cars 3.”

The presentation had a heavy focus on the challenges and creativity in how to make the unreal feel believable when animating characters, like a human child who acts like a dog and runs on all fours.

The scenes played to the students showed off how believable the child who acted like a dog could be, or how a tyrannosaurus rex can run like horse.

Research was also touched on as part of the animation and art process.

Nolte spoke about the amount of research and reference pictures he uses for each of his projects and encourages students to do the same. He said it’s one of the more fun processes in art.

He stressed the importance of emotion in every piece of art or animation people do. He said capturing what the director wants emotionally is one of the most satisfying parts of the job.

Nolte wrapped up with a question and answer session with students where he touched on his creative process.

“I don’t have a creative process. I draw what I feel first. I even draw while im being told about the character,” he said. “Just a rough sketch but enough to get the emotion I feel down.”

Nolte repeated throughout the presentation that young animators and artists need to “Go with your gut feeling” and “Draw what you feel.”

He emphasized the importance of experimenting and finding your unique style and voice while in college.

In a post-presentation interview, Nolte talked about the other paths artists can take if they can’t get into schools specifically for art.

“YouTube is a way to get your work out there and gather a following for your art,”he said. “Also, you do not need to go to school in order to build a portfolio.”

Nolte also addressed those who may be hesitant to get into animation because they feel they do not have the skills in drawing to make it as an animator or work for a company like Pixar.

“Some of the animators at Pixar are not highly skilled artists. They mastered the tools of animation and that is what made them successful,” Nolte said. “If you don’t think you can draw but want to animate, pick up a program and start learning it. Emote your feelings with whatever tool you have and go from there.”