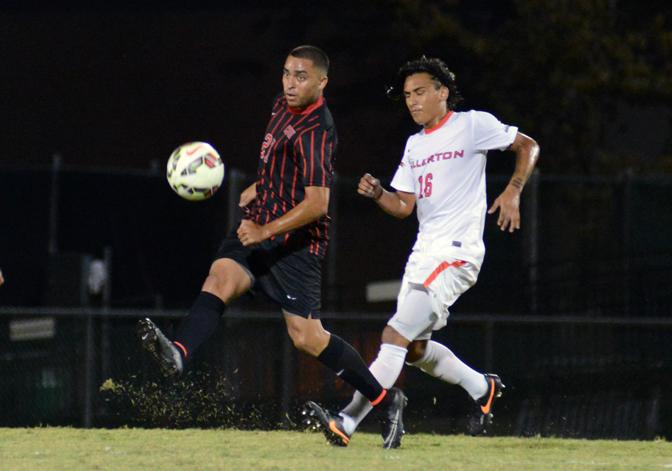 Nicolas Camacho (21) makes a pass while under pressure by a Fullerton player. (Alejandro Aranda / The Sundial)

Despite a strong second half showing, the Matadors were not as sharp in the first half of the game.

CSUN was able to get off only two shots in first half, with none of them being on goal. However, Fullerton did not fare much better on the offensive end of the field, as they only attempted three shots in the half.

Unlike the Matadors though, the Titans were able to capitalize on one of their chances when junior defender Mitchell Bell and sophomore midfielder Robert Coronado found junior forward Edgar Rodriguez off of a corner kick to put Fullerton up 1-0 in the 24th minute.

The goal marked the last type of threat either team would pose for the other for the rest of the half, with CSUN trailing the Titans 1-0 at halftime.

But as the second half got underway, it was apparent that the Matadors would come out with an increased level of aggression, evidenced by the two shots in the first seven minutes.

That aggression paid off in the 54th minute when senior midfielder David Turcios was able to score a goal into the top of the net after senior forward Carlos Gonzalez found him on a run.

The goal marked Turcios’ fourth goal of the season.

After Turcios’ goal, the Matadors did not let their foot off of the gas, as Turcios went on to attempt his fourth shot in 11 minutes, with Gonzalez adding one more attempt in the 59th minute.

CSUN’s relentless pressure was rewarded again when junior midfielder Shane Steffes was tackled on an attack in the 62nd minute, leading to a penalty shot attempt.

Morley then stepped up to the penalty spot and stuck the ball in the back of the net for his third goal of the season, and a 2-1 CSUN lead.

The goal was not only his third of the season, but also his third on penalties and his second game-winning goal.

Although the Titans shifted into a more attacking approach to close out the game—outshooting the Matadors 8-2 in the final 27 minutes—the Matadors were able to hold them scoreless in the half.

A lot of credit for the Matadors’ defensive stinginess could be attributed to senior goalkeeper Adam Hobbs, who had four saves in the final 27 minutes of the match.

Following the victory, the Matadors were able to cut the Titans’ lead in the Big West South division in half to three points.

CSUN will return home for a match against the UC Irvine Anteaters on Saturday, Oct. 24 at 7 p.m.