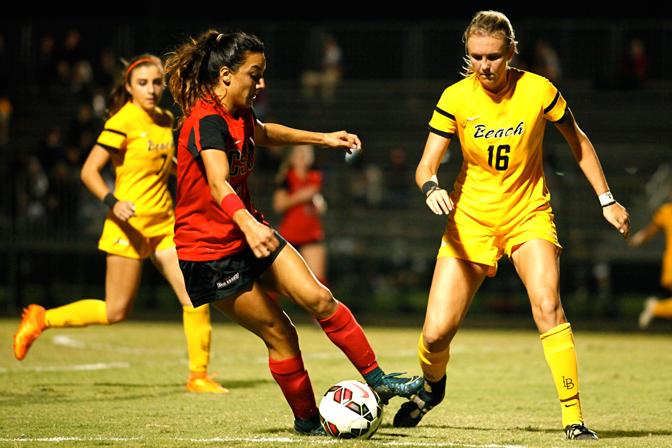 In a tight game with both teams countering each other’s attacks, it was LBSU that capitalized on its opportunity after a questionable call.

In the 79th minute LBSU was given a free kick outside the box, sophomore midfielder Jessica Vincent crossed the ball and senior defender Melanie Fox scored with a header.

“You can’t predict the refs behavior. You’re not always going to know what they’re going to call. We just need to set-up to our best,” CSUN junior midfielder Camille Watson said. “We can’t let things like that happen, whether or not it was a questionable call, our team should’ve been able to stop that.”

Up to that point, CSUN’s defense was having a great game.

In the first half the defense was able to withstand the 49ers early attacks as they came out aggressive and outshot the Matadors, 4-2.

CSUN almost capitalized on the early aggressiveness by LBSU.

CSUN senior defender Kendall Moskal nearly scored on the teams first shot attempt when they were given an advantage play and her shot towards the right corner was slightly wide.

The Matadors would get another chance to take the lead in the 12th minute, when sophomore forward Cynthia Sanchez got a through-ball and beat the last defender but had her shot blocked by freshman goalkeeper Imani McDonald.

“I felt we were unfortunate tonight not to get a goal, obviously if we score a goal early on a couple of those chances, it changes the complexity of the game and how the rest of the game unfolds,” said head coach Keith West after the game.

The early shot attempts would be the only ones for the rest of the half.

The second half saw a much more aggressive CSUN team.

From the start of the second half CSUN looked to take control of the game and find the games first score.

CSUN got the first two shot attempts of the half inside the first 10 minutes, as junior midfielder Krystal Kutscher’s shot was wide. And after dribbling through the defenders legs and making her fall after faking one way, senior midfielder Lyndsey Preston’s shot went over the crossbar.

Seven of the nine shots by the Matadors came in the second half, while the 49ers had eight, with four shots taken in each half.

The Matadors offense was efficient as they had five shots on goal, on nine shots.

On the other side, the 49ers only had two of its eight shots on goal.

CSUN would also get more corner kicks than LBSU 3-1, with all of them coming in the second half.

Although they came out aggressive and had more opportunities than their opponent, in the final 10 minutes CSUN was unable to answer LBSU’s goal.

“We did not expected them to come out as hard as they did, but I feel it’s a learning experience,” sophomore midfielder Destinney Duron said.

The Matadors had trouble trying to establish their style of play as they were called for 16 fouls, compared to only six for the 49ers.

CSUN doesn’t have much time to dwell on their first conference loss as only three games remain.

“Although it’s a bad thing, it’s a good reality check to know that it’s not going to be an easy win for conference,” said Watson. “Sunday will be a good game against Fullerton, those are conference rivals.”

CSUN heads on the road looking to rebound from the tough lose when they visit the California State University, Fullerton Titans Sunday, Oct. 25 at 5 p.m.