“Sign Language” blends poetry and photography into one exhibit 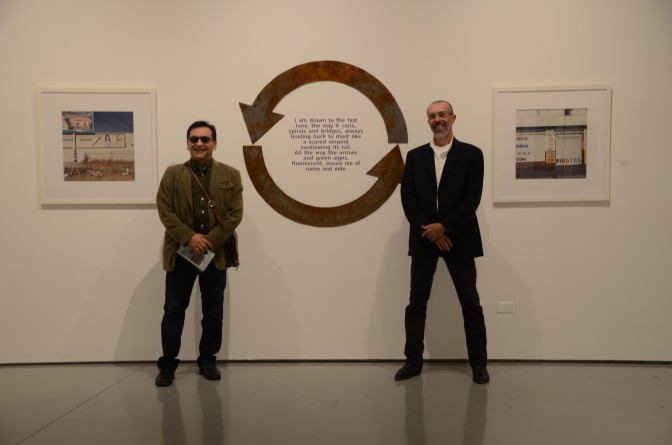 The Arts and Design Center opened up its new exhibit in the West Gallery on Saturday, Oct. 24. Work by artists Juan Delgado (left) and Thomas McGovern (right) like this one is showcased until mid-December.

Signs are meant to help those in search of guidance around unknown areas, but four artists attempt to break that norm.

A CSUN alum and faculty from California State University, San Bernardino collaborated for the Arts and Design Center’s newest exhibit “Sign Language,” providing a blend of poetry and photographs to portray the humanity of the San Bernardino community.

“These pictures remind us about all the people who’s been here,” said photographer Thomas McGovern, who focuses his photos on the unconventional things in and around his home in San Bernardino.

McGovern is also a professor at CSUSB.

Inspired by the dying art and ubiquity of hand-printed signs around his home, McGovern tries to reflect a landscape and immigrant experience of his community.

“By the time I walk down the street, I’ve seen so many things,” McGovern said. “The more you go, the more you see.”

The photographer said he wants his photos to celebrate the people of the community and hopes to inspire other photographers to take photos of their area.

“I want someone who lives in Toledo to feel that there is more in their community,” said McGovern.

But what is most intriguing about the exhibit is the addition of Juan Delgado’s poetry that accompanies McGovern’s photos. Delgado, who is the interim provost and vice president of CSUSB’s Academic Affairs, collaborated with his colleague for the exhibit.

One of the duo’s pieces “La Bestia” showcases their immaculate collaboration. The piece is a collection of broken squares of lines running parallel or perpendicular with one another, and it’s something that reminded Delgado of signs for train tracks. The poet took a twist on his perception.

“The sign is ominous,” said Delgado, whose poem reflects train tracks across Mexico that have killed many due to misleading signs. “It’s confusing. Imagine a sign you can’t understand. ‘The Beast’ kills so many people on a very difficult pilgrimage. That’s why I ended with, ‘Read all signs as if they would disappear if you turned back.'”

Delgado and McGovern team up to find ways to find the beauty in the art scattered around buildings in San Bernardino. McGovern wants to overturn the stigma of his city, and Delgado is there to provide words to the photographer’s beauty.

“There’s always the rainbow in the oil slick,” Delgado said.

CSUN alum Armando Lerma teamed up with Carlos Ramirez to showcase Date Farmers, a blend of huge commercial signs like Coca-Cola and Mustang to provide a subliminal message.

“We didn’t want to be straightforward with our art like others have,” Lerma said. “It makes you think.”

Lerma, who graduated in the late 1990s, focuses much of his art from readily available objects around his home. His neighbors also provide him with unused items for him to be creative with.

“Being creative is the most powerful form of art,” said Lerma.