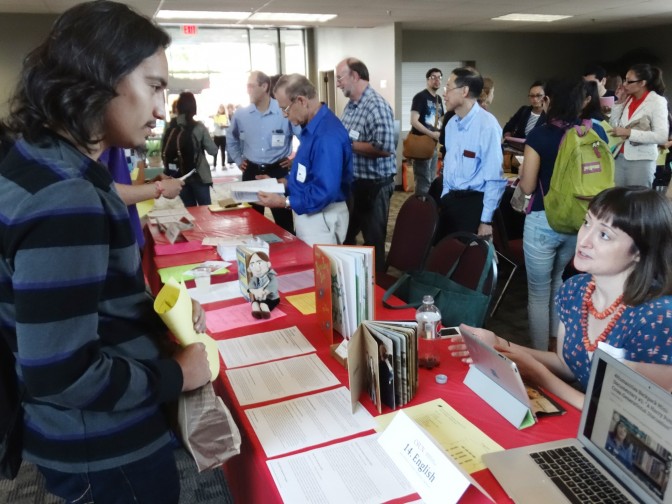 If students at CSUN had any reservations about pursuing a post-graduate program in the coming months, their concerns were likely quelled after attending CSUN’s Advancement to Graduate Education conference on Oct. 24.

The conference, free to CSUN students, gave advice and information on pursuing a master’s or doctoral degree through dynamic workshops explaining the application process and a post-graduate job fair.

Keynote speaker Donald Asher was among those who provided insight into the field of graduate studies, acting as both a wealth of knowledge and wildly entertaining to the CSUN students in attendance.

“When they brought Don out I knew it was going to be worth my time,” said CSUN Senior in liberal arts, Alejandro Davila, 22. “I learned so much throughout the whole day – the speakers and program fair really helped.”

The AGE conference, held in the USU Northridge Center, began on Saturday morning with a light breakfast while opening remarks were made by CSUN graduate program officials. Nearly 150 students attended the meeting.

“If you look at grad programs in California it goes UCLA, USC, and CSUN in order of prestige,” said Hedy Carpenter, Associate Director for Graduate Programs at CSUN. “If ever a grad student was walking across campus thinking they were the only one, remember – there’s 5,000 of you here.”

Such an introduction to the day’s event dragged the sullen and sleepy-eyed students from the line of orange juice and scones over to their seats, murmuring about CSUN’s highly touted grad programs and sheer number of graduate students.

“I really had no idea CSUN was so revered for their grad programs,” said CSUN junior Melissa Andres, 21, finance major. “It made me feel a lot more confident to know that.”

Soon after breakfast begun winding down, the conference’s keynote speaker, came rushing onto the stage after a slightly belated set time, apologizing for his tardiness.

Asher immediately launched into his speech, jumping from stage to floor and running into the audience as he spoke on how to accurately and intelligently decide on a graduate studies path.

In Asher’s brief yet informative presentation, he stressed to students clarity of purpose – narrowing in on a specific field of study in order to make themselves appealing candidates for applying to graduate programs.

“Out of all the things you can do, grad school can have the largest influence of overall earnings one can make in their lifetime,” Asher said. “What you do with the next six weeks (of applications) will change your life forever.”

After workshops following Asher’s lecture, students in attendance to the AGE conference were provided lunch and allotted time to meet with prospective graduate departments at CSUN.

“I think a lot of the graduate program departments here at CSUN are trying their best to offer some life-hacks for the real world,” said Stephan Krut, representing the music graduate program at CSUN. “The music department isn’t about statistics – 10 percent of students will make it out of here – it’s about real life application of the skills learned here.”

Many students networked during the job fair, exchanging business cards and employing some of the tactics discussed in the workshops on how to make a valuable impression with a graduate department member.

“Today I learned to be fearless,” Davila said. “Before attending this morning I was fearful of grad school. After today everything I learned put me at ease with my decision.”