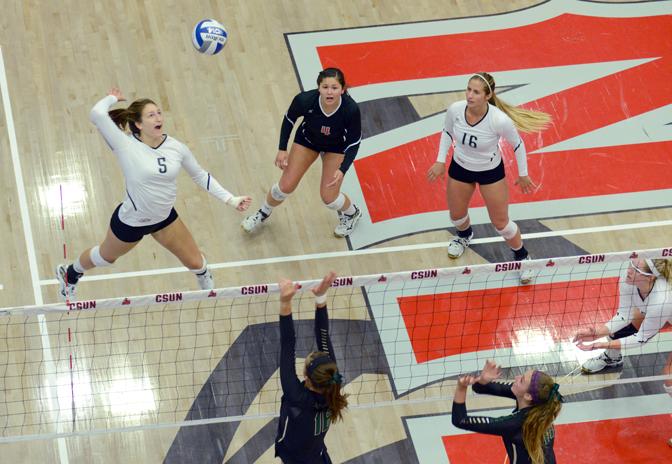 The Matadors fall in straight sets

“I’m certainly not going to start giving excuses. This team needs to play better and I don’t care who we’re playing; we had the ability to win that match tonight,” head coach Jeff Stork said.

Set one had the Matadors behind early giving the Mustangs their first two points before a kill from freshman outside hitter Aeryn Owens put CSUN on the board. Cal Poly quickly stretched their lead by four at 5-9, then kept at least a four point lead over the Matadors. At 21-23 a kill from junior middle back Stephanie Serna Arreola put the Matadors within one, but the Mustangs answered with back to back kills. Though CSUN lost, they both out hit (.394 to .325) and had more blocks (3 to 0) than Cal Poly.

“Whenever someone makes a mistake they get kind of down on themselves and I feel like that kind of affects the next play, but we’re getting better at just shaking it off and just ignoring what the mistake was and just trying to do better the next play,” said Owens. 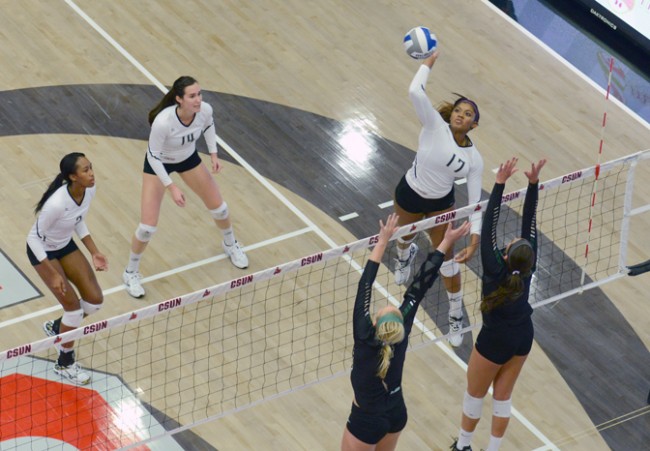 The second set began the complete opposite as the first with the Matadors taking the first two, giving two back then stretching to a 6-2 lead over the Mustangs. CSUN maintained their lead until Cal Poly tied it at seven with a kill. The Mustangs then took the lead at 8-8 with a CSUN hitting error. The Mustangs then pushed their lead to six at 9-15, but the Matadors came back to tie it both at 15 and 17. Cal Poly, however, prevailed winning the set 22-25.

The third set started off close with the score tied at four, but Cal Poly pulled ahead quickly taking the score to 11-15, then 11-18. The Mustangs pushed it to 13-22 before declaring victory at 25-16.

“They’re a pretty good team. They have a fast offense which makes it hard for blockers and to get to the ball and it was a tough, tough night,” said junior setter Maddie Leiphardt. “We made a lot of errors that can be fixed on the spot, but hopefully tomorrow we’ll come out with a different mindset and we’ll play better.”

“We have to play better and I don’t care what match it is. I thought we were actually okay offensively tonight,” said Stork. “We played a much better match than what is on the scoreboard.”

The Matadors down the Gauchos in a five set thriller

The first set began with the Matadors behind early. UCSB (6-14, 2-7 Big West) gained a 10 point lead at 3-13 and were able to maintain it by at least nine the rest of the set, ultimately winning by 17 points. The set, dominated by the Gauchos, lasted just over twenty minutes with the Matadors being outhit .667 to -.182.

“They know that they’re a better team. They’ve got to find the winning spirit that they saw toward the end,” said head coach Jeff Stork.

Contrasting the first set, the Matadors started the second set on top. UCSB tied the score at six and the two then volleyed the lead with four more tie scores until UCSB went on a three point run at 11-11 to take the lead. The Gauchos stretched their lead to four at 13-17 and left CSUN fighting to catch up and unable to claim victory.

“We knew that we really have to win so we kind of just turned it around, talked it up in the locker room, realized what we needed to do to fix things (and) our coach kind of changed up the line up a little to throw the other team off, so that really helped us in winning this game,” said senior outside hitter Cieana Stinson.

The third set mirrored the first with the Matadors falling to an early 1-8 UCSB lead. Back to back errors at 9-10 allowed CSUN to take the lead, but only temporarily. The two battled back and forth but CSUN prevailed, pulling ahead by as much as five at 23-18. The Matadors won the set by four at 21-25, out hitting the Gouchos for the first time in the match, .200 to .111.

“We were kind of complacent in the first two and not doing so well in the three also, but I definitely think we came out in the fourth set with fire and passion- that’s just what we needed to carry us on to the fifth set,” sophomore setter Lauren Conati said.

Starting off close, the fourth set had the Matadors and Gauchos volleying for the lead from the first point. There were three tie scores by ten, but by 11-14 UCSB began to break away. The Gauchos held their lead by as much as four points, until a kill from Haake tied it at 21. A final kill from Haake at 24-23 won the set.

“We just have to find it within ourselves; we have to have the confidence in ourselves. I think having confidence in the coaches, in the bench, in the team- it’s all of us together; it’s not one person it’s the whole team,” said Conati. 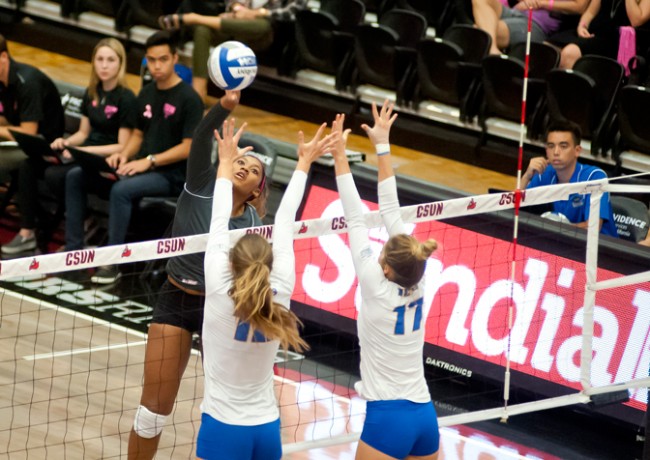 The final set had the Matadors on top taking an 8-4 lead. At 8-9 the Gauchos tied the set, then took the lead. CSUN then tied it at ten and took the lead from here on out. A five point run capped by a service ace from red shirt freshman opposite hitter Nada Dragovic won the set 15-10.

“We knew Santa Barbara was a team we could really really handle really well so we took advantage of that and being at home and having a lot more home games, so we just went with that,” said Stinson.

“I think they saw what they can be toward the end of that match. They started believing and that’s what winning teams have to do with each other is believe in each other,” said Stork.

The Matadors travel take on UC Davis Thursday Oct. 29 at 7 p.m. at The Pavillion.