Misconceptions about “Day of the Dead” 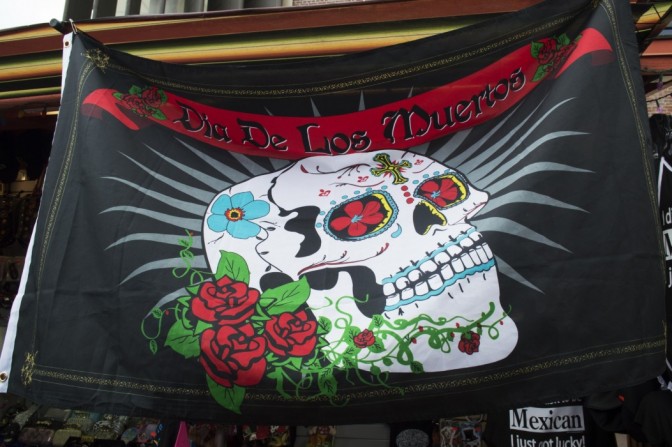 Olvera St. is known celebrating Day of the Dead by having entertainment, colorful altars and exhibits to be enjoyed by the general public. Photo credit: Michelle Moran

Sugar skull face paint is almost expected every time Halloween comes around. People enjoy painting their faces with colorful flowers and decorative designs to create this distinctive look. Although it is a fun look, it is informative to know the background of Day of the Dead if being portrayed.

Day of the Dead, or Dia de los Muertos, is celebrated on Nov. 1 and 2 and the sugar skull, also known as a calavera, is an iconic part of the tradition. Although this holiday is mostly known as part of the Mexican culture, it is also celebrated in all of Latin America.

“People should know the history of the symbols they choose. People who do not understand the tradition of DDM [Day of the Dead] are still attracted to its color, its festive aspects, and its central icon, the skull or the calavera,” said Lara Medina, a Chicano/a Studies professor at CSUN. “I do not think it is a good thing to appropriate or simply use a cultural symbol without understanding it.”

The calavera halloween makeup is seen on a lot of young people around Halloween time. It has become more popular over the years and there are actually Day of the Dead costumes on popular websites like Party City.

“Day of the Dead isn’t Halloween, so people shouldn’t do it in the first place,” said Karina Ortiz, 22, History and Chicano/a studies major.

According to Inside Mexico, Dia de los Muertos is not the Mexican version of Halloween. Mexicans have been celebrating this holiday since the year 1800 B.C. This day honors dead relatives by making altars decorated with their passed relative’s favorite food, things and sugar skulls, also known as ofrendas. It is not a day of sadness, but of happiness to remember the ones they loved and cherished.

“You want people to understand the meaning of Day of the Dead and what they’re celebrating, that it’s not just a big party, that it does have spiritual and historical significance,” said Cervantez.

Sometimes people don’t paint their whole faces like a sugar skull, but just half of their face. There is a reason for this that pertains to the holiday, but sometimes females want the other side of their face to also show their nice makeup.

As stated in National Geographic, “Dia de los Muertos celebrates death as a part of the human experience: Every living thing will eventually die. Every human being, no matter how beautiful or well-dressed, will eventually be exposed as nothing more than a skeleton and skull. The half-decorated calaveras recognize this duality.”

During this holiday, people believe that the dead are awakened from their eternal sleep to be a part of the community, to share the celebrations with their loved ones, according to National Geographic.

Cervantez is coordinating with MEChA with two Day of the Dead events at CSUN, starting on Oct. 29 with a night of remembrance and a viewing of the altars and ofrendas. Continuing on Oct. 30 with a celebration which include food, live music, art vendors and face painting for children.

For more information on these two events, visit http://www.csun.edu/humanities/chicana-chicano-studies/events/annual-noche-de-ofrendas.