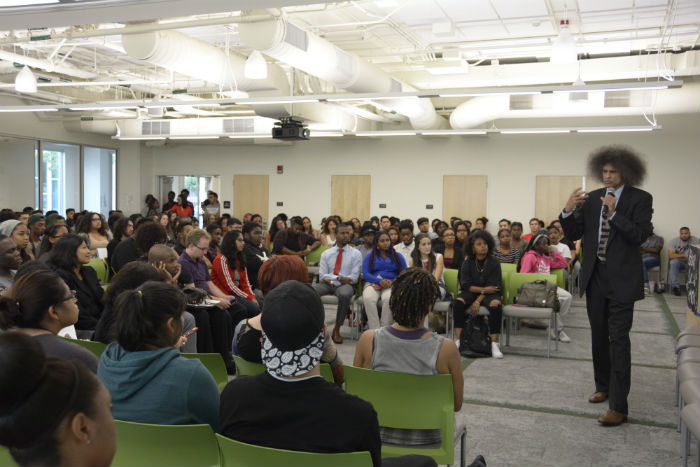 By now, most of you have likely heard the expression “Black Lives Matter” (BLM), or at the very least seen it as a hashtag somewhere on social media. It has made a significant mark on how society looks at itself today regarding police brutality.

It arose after the deaths of Eric Garner, Michael Brown, Sandra Bland and all of the other young men and women who fell at the hands of out-of-control authorities, the numerous cops who have since been acquitted and/or forgotten.

In that absence, and with the moral rise of Black Lives Matter as a physical movement, there have been those [such as presidential candidate Mike Huckabee] who suggest that a broader point can bring more support. “All Lives Matter” is that broader point, giving emphasis on the basic idea that all lives in this nation have a purpose.

The reaction from BLM has not been kind, and understandably so. This “bigger picture” concept is seen, predominately by those in BLM, as simply missing the point. What makes BLM necessary and individualistic from All Lives Matter is that there is not a fear that exists among young white men and women of being randomly attacked by a reckless police officer.

A recent open discussion on the topic of All Lives Matter urges students like Josh Briggs to say, “…the only reason we’re having this discussion is because black lives are being affected.”

The lack of outrage over the death of Zachary Hammond at the hands of a police officer was based upon the nonexistent precedence for white teenagers being senselessly killed month after month, week after week. The reaction behind the deaths of unarmed black men and women are a consistent build-up to what BLM has become.

BLM members will tell you that they are an evolved form of the Civil Rights Movement, where everyone involved serves as the overall face of the movement. The reactionary question to the death of an African American at the hands of an overzealous police officer is, “Does this life matter?” When that question is being asked over and over again, it needs to be noted that the proportion of black teenagers and adults that are slain by police is inconsistent with the number of deaths of white people at the hands of said officers.

All Lives Matter has other connotations that alienate people. It serves as a staple for ignoring the issue of police brutality, assisted by the sibling slogan “Blue Lives Matter,” memorializing the deaths of fallen officers.

It has also brought on conservative views on abortion that further direct the pain away from the issue. For example, conservative television personality Glenn Beck called for a “sequel” to Martin Luther King, Jr.’s March on Washington. This was described by journalist David Weigel as a “taunt into a pro-life, pro-Christian clarion call.” Republican presidential candidates have called BLM’s title as “exclusionary.”

It can be further questioned as to whether or not these candidates, pundits and wannabe activists know what facts BLM has to back up their case against police brutality. Ultimately, it could be that behind those details comes the unifying factor in bringing people together and in enforcing that black lives really do matter.

Correction: The original story gave the name “Eric Garner,” when in fact it is Eric Garner.