A weekend at Beach Goth 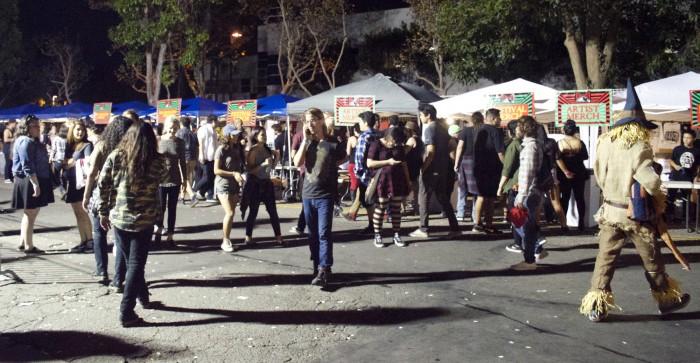 Beach Goth 4 generated thousands of attendees both days on Oct. 24 and 25 at the Observatory in Orange County. Musical acts included The Growlers, Grimes, Die Antwoord, and many more artists graced the stage to this all ages event. Photo credit: Michelle Moran

Beach Goth. Two words that normally clash, unless you are describing the sounds of The Growlers who started this festival in 2011 for their local fans.

Their fourth annual two-day event at the observatory in Santa Ana was a great success this past weekend. The crowd was made up of numerous eclectic personalities yet all seemed to have one thing in common, their taste of music.

“Beach Goth, the place to glam up in your favorite leather, your black fishnets and shimmering studs. Dress to depress and dance like you’re going to die,” said Daniel Broadway, 23-year-old from Fullerton when describing what he likes best about the festival.

When the Growlers covered the Doors “People Are Strange” it perfectly embodied who the festival was for and what this psychedelic surf group was celebrating with this festival.

The strange came out to play at the Observatory in Santa Ana, with many dressed in costumes and even those who weren’t still danced on the fine line, with attire resembling not so subtle influences of fashion from the 70’s and 90’s like denim skirts and baby tee’s.

One thing was certain at Beach Goth, people who would normally stand out in a crowd blend in with this melting pot of effortlessly cool people, with their greasy hair, ripped jeans and laid-back personalities to match.

Teenagers, covered in tattoos, trailed cigarette smoke as they walked with a gothic swagger to and fro. This festival, unlike many others, have no age limit on their attendees which means you saw people of all ages.

Madison Wäscher a 16-year-old from Huntington Beach said “There’s a lot more people, and theres a lot less stuff around, like props and rides.”

“It’s really crowded,” said Sciumbato. Her favorite performers were Mac DeMarco and of course the Growlers.

There were only a few things to do when not watching the bands play on either three of the stages. The outdoor area covered a parking lot that had buildings at each end, one being the Observatory.

Unlike last year, there were no rides, but there were some boutiques set up and a few props that festival goers were able to find a home inside like a bus and some giant lips.

There were no surprises when pizza, PBR and Popsicles ended up being a crowd favorite. The 21-and-over crowd enjoyed six locations to buy drinks, two of which were beer gardens located on each side of the main stage.

With the venue holding true to its local appeal, it opted out on a “hyper-commercialized” atmosphere and stuck with simplistic food and beverage choices like tacos, burgers and soda (including some vegan options).

One major complaint was the $3 water bottles and no place to refill. However, the event allowed unopened bottles of water and by the second day many people brought their own large waters to save money.

Inside, Mr. Twin Sister set the first mellow vibes for Beach Goth. The New York band was surrounded by cups of beer and baby bangs. They cooled off the crowd with their chill sound and hypnotizing vocal performance by front woman: Andrea Estella. Her dreamy tone swam through the crowed as they swayed happily to their short but sweet set.

For the anticipated set by Ghost, I attempted to make it towards the front to gather a full experience of what its like to be in, or at least near a mosh pit. I was met with failure, after I surrendered to the sweaty crowd undulating with pride and pushing me, further than I wanted to be pushed both literally and figuratively.

Both Mac DeMarco and Grimes drew large crowds, playing favorites from both old and new albums their fans gushed over their performances and pulled out their phones to capture the moment.

Finally the Growlers took over the stage dressed all in skeleton costumes for their first performance of the weekend. They catered well to the fans playing hits from their most recent album ‘Chinese Fountain.’ Lead singer, Brooks Nelson, didn’t let the audience down with his impeccable vocals that sounded almost better than the record.

Sunday started with a different tone, it was the second day and people already seemed to walk around with certainty with where they were going and what they were doing.

The first artist to make note of for Sunday was DIIV. Enjoyed by a large crowd for their returning performance on the main stage, these group of guys impressed with their unique sound.

While many people who came to the event were locals, some people drove a far distance to see some of their favorite bands.

Brothers Tim Morris, 23, and Sean Morris, 20, also first-timers traveled all the way from Phoenix for this 2twoday event.

“I like the environment a lot, I wish there was a little bit more grass but besides that its awesome. The Growlers were amazing last night,” said Tim.

“The Growlers put on a hell of a show,” said Sean, whose favorite set up at the venue was the Graveyard inside. “It’s awesome, especially last night’s Toro Y Moi, with the motion picture behind them.”

Many wondered how Juicy J would appeal to this crowd, but with a mostly psychedelic scene mixed with marijuana, rappers not only smoke it, but also rap about it.

While some couples created a different vibe with grinding, others surprisingly jumped around mouthing every single lyric to Juicy J’s set, including throwbacks he played from the 90’s even though it was likely they were not even born yet.

Yolandi, Ninja and DJ Hi-Tek put on an incredibly fun show dropping new beats and of course playing their fan favorites like I Fink U Freaky. This duo knows how to get a crows moving and overall had the best stage presence of any other group, utilizing the entire stage and keeping it upbeat throughout.

While you would not usually describe this act as cute, it did have an adorably cute moment when Ninja welcomed their 10-year-old daughter Sixteen onto the stage to dance in her pajamas to her favorite song “Earned it” by The Weeknd.

The Growlers were last to take the main stage Sunday night this time all decked out in silver paint and clothing from head to toe. Giving a quick shout out they changed their lyrics for “Love Test” off their most recent album from they don’t make them like they do in the country to – they don’t make them like they do in Orange County. Paying homage to their homegrown fans and their grassroots, the artists thanked everyone for supporting them and coming out to their festival.

“I love this festival because I am a freak surrounded by other freaks who have the same taste in music,” said Connor Gould a 22-year-old from Santa Clarita.

Ticket prices were well worth what the festival had to offer and where they lacked, it was made up in good music and a unique experience.

With The Growlers and their festival gaining some what of a cult following, the lineup is sure to continue to impress at next years event. Keep your eyes on this band, and make sure to look out for this unique festival next October.