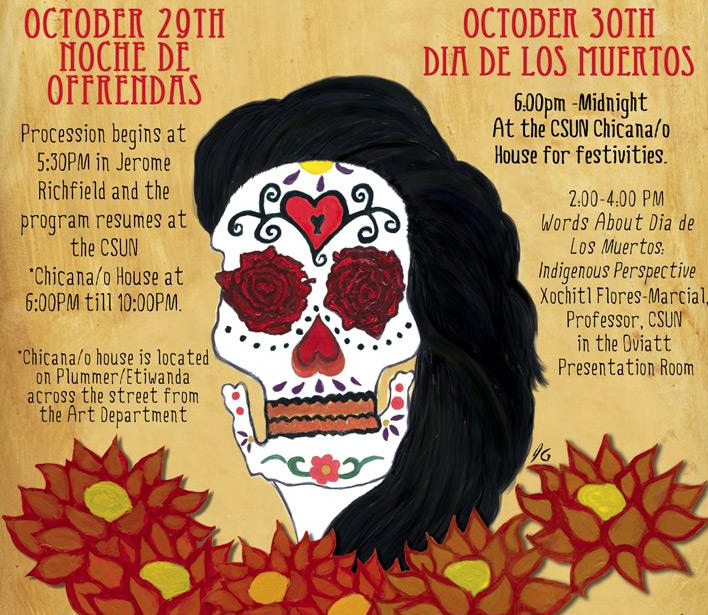 The Pasadena Playhouse will present the world premiere of Breaking Through, about an up-and-coming singer/songwriter who’s trying to find herself while trying to breakthrough the music industry.

A show that has been said to bring its own unique mix of “sexo y violencia” will be showcased at the Mayan. See good vs. evil be played out in a masked Mexican style wrestling, burlesque strip teasing and comedic commentating.

The Chicano department will host a kinesiology sport studies seminar focusing on the Mexican-American women in sports and their struggle for gender equality and those who have overcome these obstacles.

The event will start with a night of remembrance, reflection and viewing of altars.

In the spirit of Halloween, Alex Theater will show the 1939 film Son of Frankenstein.

For its monthly movie night, The Park DTLA will be showing the 1986 film, Little Shop of Horrors. There will be food, music, games and a costume contest.

The Vancouver native is bringing his sound of indie rock and soulful piano-infused tracks to Hollywood’s Fonda Theater. With his new album released not so long ago, expect to hear new tunes from the album.

Known for its rooftop screenings, in keeping with the spirit of Halloween, Ricardo Montalban Theater will screen “Friday the 13th.”

Considered to be one of the most gifted classical guitarists of the younger generation, Thomas Viloteau brings his talents to CSUN.

Nightmare Before Christmas at The Hollywood Bowl

Danny Elfman will step into the role of Jack Skellington for a live performance and screening of the classic film. John Mauceri will conduct a full orchestra and choir, while Elfman and special guests will be on lead vocals.

Boo at the Zoo

The LA.. Zoo will end its annual Halloween celebration with spooky tales, pumpkin carving, puppet shows and close interactions with some of the zoo’s creepiest crawlers.

To celebrate its 40th anniversary, The Hollywood Forever Cemetery will screen the cult classic The Rocky Horror Picture Show on Halloween night.

Founded in 2009 in Richmond, VA, the metal band consisting of Aschiah Bogdan, Parker Chandler, Dorthia Cottrell, Garret Morris and Ryan Wolfe will play at the Roxy with special guest yet to be announced.

Japanese American National Museum will have its fourth “Giant Robot Biennale.” “Giant Robots” has a reputation for championing up-and-coming artistic talents, many of whom have gone on to acclaimed careers.

The “Rain Room” at LACMA is a wet wonder from art collective Random International is literally a massive room filled with water raining from the ceiling. No need to take extra clothes because you stay dry while the room downpours around you. The timed-entry exhibition will allow up to 22 people in the gallery space during 15-minute sessions, with up to seven people under the rain at the same time.

The veteran artist returns to Los Angeles with another collection of masterful work. Expect lightning bolts, grids, and lots of lines.

Debuted by renowned comedian Paul Rodriguez, Caliente Mondays at The Laugh Factory promises to continue to feature fresh Latin comedians at every show, such as Felipe Esparza and Erik Rivera, as well as comedy stars including Rob Schneider.

Formerly housed at Littlefield in Gowanus, Brooklyn. The stand-up show Hot Tub has moved across the country and into The Virgil. Kurt Braunohler (IFC’s Bunk, Chelsea Lately), and Kristen Schaal (Flight of the Conchords, The Daily Show) co-host a comedy show for comedians to try out new material and fans to feel something special with this hole in the wall location.

The American rock band from Minneapolis brings its unique sound to Los Angeles when they play The Wiltern.

The Games Room will host a billiards and table tennis tournament for those looking for some friendly competition; sign up is open to all students. The finalist will play for a trophy and bragging rights.

Day of the Dead

El Pueblo de Los Angeles Historical Monument in Downtown will celebrate the “Day of the Dead” with festive wares from the merchants on Olvera Street and a candlelight procession.