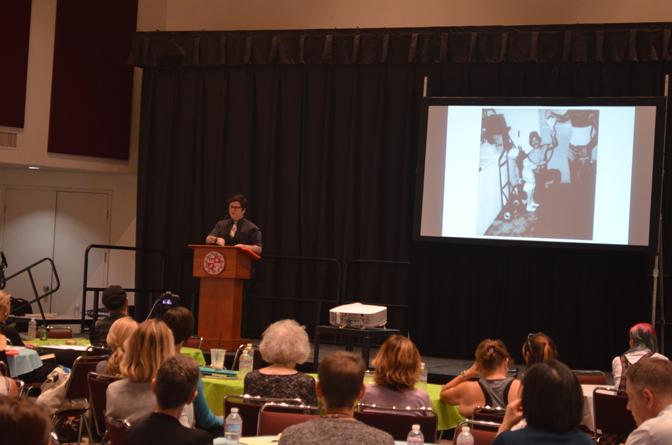 In hosting Los Angeles’ Fifth Annual Suicide Prevention Summit, “The Power of Our Voice: Hope, Help and Healing for High School and College Students” on Tuesday, CSUN provides a new perspective towards suicide prevention and education.

This is the first time the event has been held by a university, attracting not only students from the campus but members of the surrounding community, educators, experts, survivors (of loss and attempt) and supporters both in and out of state.

“This kind of thing is really important for students, because it’s the number two leading cause of death between the age group of 15-24 year-olds,” said Hansook Oh, mass communications graduate student at CSUN.

For that age group, the only cause greater than suicide are road accidents.

“Everybody’s voice needs to be heard, so we need people to ask each other if they’re concerned about someone or to tell somebody if you’re in trouble and to do that we have to be comfortable with the word suicide,” said Judy DeBonis, principal investigator for Ray of Hope.

The Summit is designed to bring awareness to the subject of suicide; to bring education on how to prevent it and how to find the best type of help for each individual person suffering. Talking and uncovering the word suicide itself through this education and shared memories lessens the intimidation of the word, and is intended to make it easier to comprehend and grasp as a preventable act.

“Suicide rates are highest in the middle age population, but I think if we can get to youth and young adults with informational prevention and reducing stigma on mental illness, I think that we’re setting ourselves up for success down the road,” said Collins.

The Summit began at 7:30 a.m. with breakfast, including free bagels to those who were attending. Key note speaker Stan Collins gave the first of three presentations he would deliver throughout the day. From here, those in attendance would spread out among seven different Breakout Presentations. Each lasted an hour and a half and each was packed full of knowledge, powerful emotion and experience.

“(At) CSUN we’re a leader in a lot of different issues, a lot of diversity issues, but we need more of these kinds of conversations on campus,” said Oh.

Another meal break came, then the second round of Breakout Presentations started. It contained the same speakers as the first, just to fresh faces. It gave audience members a chance to fully attend more than one seminar and gain as much as possible from each.

These presentations included Collins’ “After A Suicide: Postvention is Prevention,” in which he served as a specialist on how to see the warning signs and not just focus on the risk factors that may come with. He said he used a marker falling to the ground to illustrate his point, the idea that when you provide only one solution [to fall to the ground] there is only one solution.

“We really have to be careful with the message that we are presenting to people,” Collins said.

In the “Preventing Suicide Among LGBTQ Youth” presentation, Crisis Service Trainer for the Trevor Project and moderator Chris Bright said it is alright to acknowledge being unsure which pronoun to use when speaking to someone who identifies as transgender, and further clarified some misconceptions that come along with the notion of being transgender.

In the same presentation, speakers shared their experiences with suicide and spoke of the struggle they endured before they overcame it. Natasha Colin-Ellerin said her childhood was difficult, growing up a lesbian in an all-girl Catholic middle school and not wanting to dress like the other girls or look like them. Ellerin spoke of how it was to be bullied and how she did not understand what it was she was going through because she did not know any better.

“It was a very confusing time,” Ellerin said about liking boys in middle school.

All of the presentations are geared on educating people of all ages in the reality that suicide is. In “Sharing Stories: The Power of Lived Experience,” Susan Auerbach, Professor of Education at CSUN shared her story of the loss of her youngest son. As a junior in college, she said it was hard for Auerbach to see the signs, because she did not see her son year-round, so she was left with what she called “complicated grief,” which she said many others experience when they feel the severe shock of the death.

Auerbach said she shared the blog she started in hopes of helping herself and others.

“I hope the village of 300 or so that are here today can pass on the message that ‘It Gets Better,’” said Auerbach.

She did not at first understand how it could help her, but then it led to her becoming aware of the “It Gets Better Project” and other organizations, which helped greatly. She then begged the question of what would happen if suicide/ mental health gained as much awareness as rape and sexual assault on campus, because awareness is crucial to prevention.

“The truth is, when we open the conversation up, that’s when we find out what somebody’s going through and it may not be suicide,” said DeBonis. “Most times it won’t be, but on the rare chance that it is nobody’s asked the question. Then we might be leaving somebody alone without the supports that are there.”

Oh said suicide is a real, serious issue, but not an abstract idea difficult to grasp.

“This is not just a matter of emotions or feelings or health; it’s a matter of succeeding as a student, (it is) student resiliency,” said Oh.