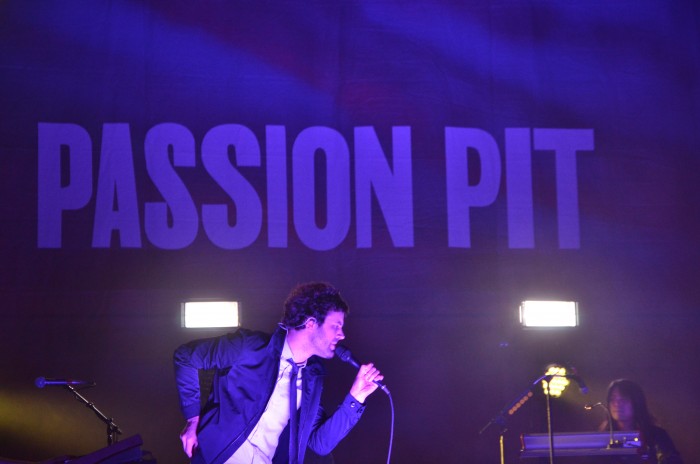 Passion Pit helped pioneer the synth-pop “indietronica” band movement, and their performance at the Wiltern on Oct. 28 showed why they were still rulers of the trademark sound.

The music they create is high energy with catchy pop hooks – even when the falsetto vocals of frontman Michael Angelakos can be hard to understand what he sings.

Fans gathered at The Wiltern, an intimate art decor venue, on Wednesday night to dance along with Passion Pit.

Beyond the high energy performance, Angelakos’ lyrics about alcohol abuse, mental illness and broken relationships drew an energetic crowd. Angelakos opened up about his battle with bipolar disorder this year.

When the band played “Moth’s Wings,” the 28-year-old lead singer grabbed a guitar and played along. Angelakos said it is one of his favorite songs to perform.

The show didn’t rely heavily on their “Kindred” material. Thankfully, they played songs from their older albums. Songs from their album “Manners” received a loud applause from the fans.

Passion Pit played a few more crowd favorites including “Carried Away,” “The Reeling” and “Take A Walk,” from the 2012 album “Gossamer.”

Surrounded by a near-blinding light show, Angelakos bounded across the stage as he belted the band’s hits from new tracks and past albums.

Angelakos shouted out a few thank yous and left the crowd with over an hour of upbeat music.

After closing, Passion Pit returned for a one-song encore with “Sleepyhead,” one of their biggest hits to date. The crowd seemed to have a good time thought the night, whether they were singing and dancing or simply observing from the back.

Opening band Atlas Genius took the stage and left a positive impression with their alternative songs. The band continued with new music. The room began to fill up when the Adelaide, Australia, natives played their infectious single “Trojans.”