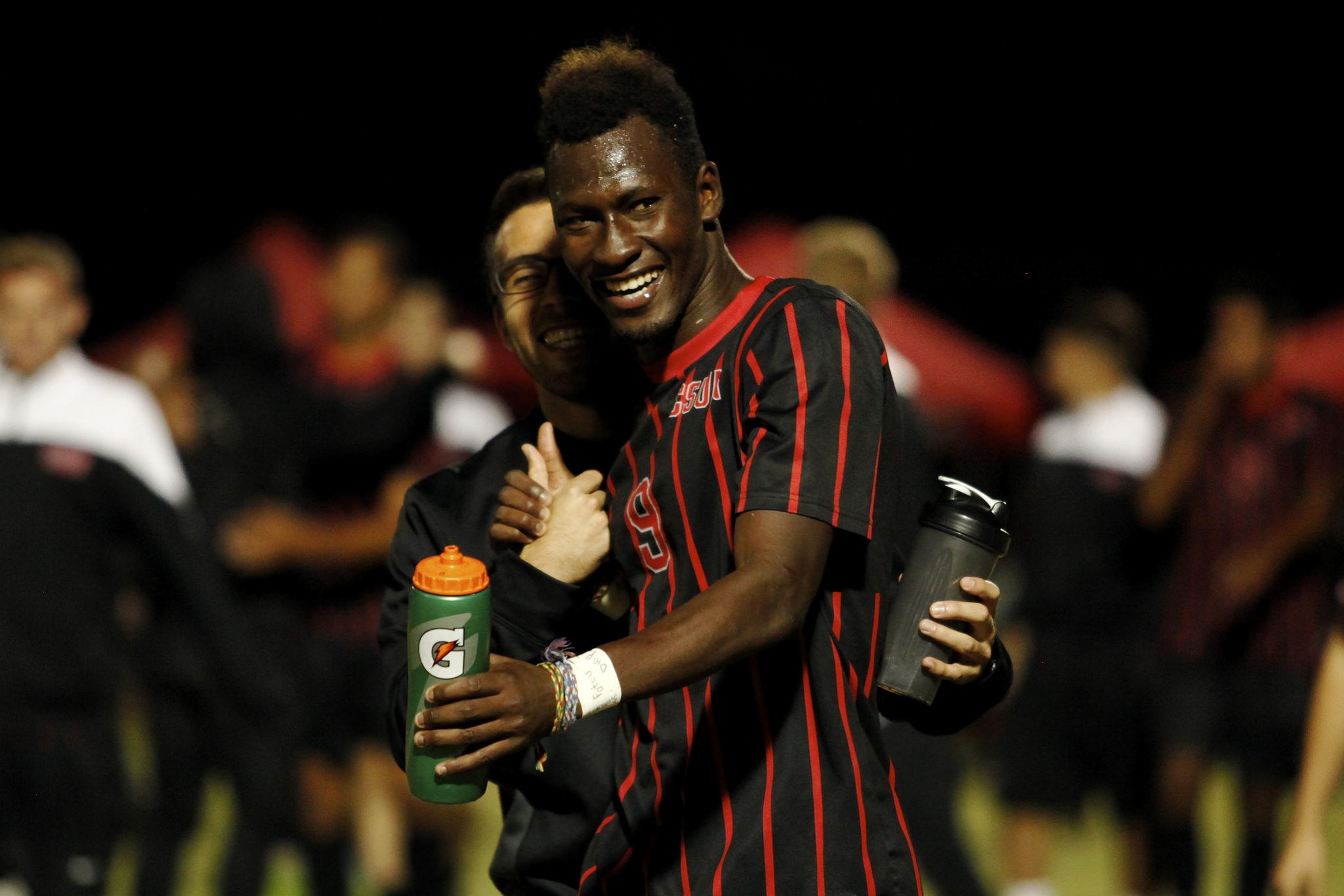 Sophomore forward Papi Diouf celebrates with a member of the CSUN staff after scoring the game-winning goal against UC Riverside. (Juan Pardo)

The Matadors trailed 1-0 in the first four minutes when UC Riverside sophomore Ricardo Ruiz scored a goal off of a free kick through a wall of CSUN defenders from about 25 yards in front of the goal.

Though UC Riverside led. later in the first period CSUN senior forward Carlos Gonzalez was fouled, which led to a Highlanders yellow card, and allotted the Matadors a penalty kick opportunity.

The Matadors chose senior defender, and captain, Trevor Morley for the penalty kick and Morley drilled it tying the game at 1-1 in the 14th minute.

“The PK is just me being called up to do a job,” said Morley about the game tying penalty kick. “The real hard work was put in by the guy who got the PK. Carlos made a great run, committed the defender, got a foul, that’s who really scored the goal.”

After the penalty kick goal, the game stayed tied for most of the game until the Matadors broke through in the 74th minute.

Diouf has only been back three games, after missing numerous games, but his impact has been felt in the Matadors late push for this playoff clinching opportunity.

“It feels great, it’s great teamwork.” said Diouf about the team’s playoff berth. “We’ve been working everyday just to make the playoffs and that’s one of the reasons I transferred from Louisville to here and we did it I’m so happy.”

CSUN senior goalkeeper Adam Hobbs stifled UC Riverside after giving up the early goal. They had 11 shots and five corner kicks, but nothing seemed to faze Hobbs who had three saves, none more important than a leaping save attempt with six minutes left helping keep the Matadors 2-1 lead.

CSUN, up until this point, had zero wins on their home field in conference play, but they were determined to not let this one get away from them.

“I can’t even describe it,” said Hobbs about winning be his final home game. “Going through pretty much the whole season without a win on this field and waiting until the last game to get it, it’s just a great feeling especially knowing that we clinched playoffs.”

The Matadors will wrap up their regular season campaign when they travel UC Irvine to play the Anteaters at 7 p.m. on Saturday, Oct. 31.