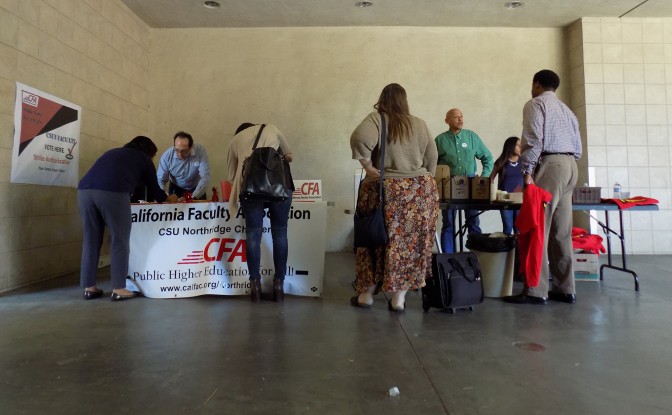 The California Faculty Association vote on whether or not they will go on strike impending the results of the fact-finding process, ended Oct. 28 at 5 p.m. but the result of the vote remains unclear.

The 10 day vote was available to CFA members online and in-person at all 23 CSU campuses.

“A majority voted online, but there are some folks that like it the old fashioned way. This process is great because it gives us an opportunity to meet all the faculty on campus,” CSUN Chapter President Nate Thomas said.

The vote would allow the CFA to go on strike if they cannot come to an agreement after the fact-finding process.

However, currently no date has been set for the fact-finding process.

“We haven’t even selected the fact-finder yet. So far we just know who is going to be on the panel,” CFA Political Action Legislative Chairwoman Lillian Taiz said. “So once that’s done we will have meetings and present our facts, but it’s hard to say how long that will take.”

As of now, CFA Associate Vice President, Kevin Wehr, has been selected to represent the CFA. Both parties are still in the process of mutually selecting a neutral third party.

Third parties are typically selected from a list of fact-finders that provide these services. Both bargaining teams then go through the list and try to find someone who is mutually acceptable.

“The fact-finding process is a bit uncertain. We have to wait till that process is completed and it will take a while. We have to first come to an agreement for the third party, and then we have to do the work in creating a report,” CFA President Jennifer Eagan said.

After the decision is made both sides will have a 10 day blackout period during which the sides are encouraged to see if they can come to an agreement.

Since the decision to strike relies on the fact-finding process, there is no set date for when a strike could occur.

“I think we can say it won’t be this fall semester, that would be too quick,” Eagan said.

Although no resolutions have been made yet, faculty and students on CSU campuses have been very active in raising awareness of the “Fight for Five” initiative.

At CSU Fresno and CSU Long Beach, CFA members drew in crowds as they performed a skit, “Race to the Bottom.”

Many CFA members will be attending the CSUs Board of Trustees meeting Nov. 17 in Long Beach in an effort to express their indignation to CSU Chancellor Timothy White.

The meeting is expected to have a large outcome of people, as the CFA has been encouraging many to attend.

“People are coming from every single campus, its going to be a really big event. Everyone is welcome to join us,” Taiz said.