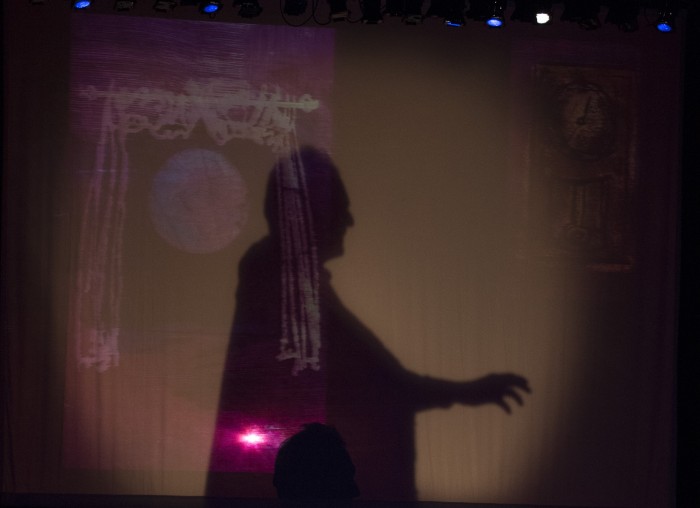 Nearly 120 years later, Dracula proves to be one of the most spine-tingling tales our literary canon has to offer.

In anticipation of the upcoming Halloween weekend, L.A. Theatre Work’s presentation of “Bram Stoker’s Dracula” at CSUN’s Valley Performing Arts Center on Wednesday was a perfectly spooky segue to All Hollow’s Eve.

Presented in a hybrid format of audio theatre – wherein costumed actors face the audience to deliver their lines – and an array of projected visual images, “Bram Stoker’s Dracula” proved to be an exciting reinterpretation of a Gothic classic.

“We’re really excited about the idea of presenting theater at CSUN that isn’t what people are used to,” said VPAC Executive Director Thor Steingraber in an interview earlier in the performing art center’s season.

As guests entered the performance hall, the play’s eerie score rang throughout the VPAC, jagged and dissonant symphonic pieces that reminded one of a Victorian era crypt.

“Hearing the music and seeing the lights start to dim ever so slightly really got me into the mood of the piece,” said Porter Ranch resident Glenn Maddox. “This is the type of performance that warrants some dark atmosphere before leaping into it.”

Before “Dracula” began, some of the players came out and briefly explained to the audience how Theatre Works performances are conducted.

The cast explained that while the audience would be facing the crowd, Foley tables on either side of the actors would be producing any necessary sound effects, coupled by visuals on a screen behind the set.

The visuals provided by the screen often depicted aptly-crude animations to underscore the play’s dialogue; recurring themes of drawn blood appeared when Dracula spoke, silhouettes of vampiric victims appeared when wooden stakes were driven into their chests.

The show launched into the narrative at a breakneck pace, wasting no time to set a positively sinister mood within minutes of the performance. Though based on dense source material, Charles Morley’s adaptation of Bram Stoker’s classic dispensed with lengthy exposition and brought forth the character of Dracula straightaway.

Patrick Wenk-Wolff’s performance as the titular role was instantaneously chilling, channeling the likes of Bela Lugosi and Christopher Lee to form a figure both intriguing and villainous.

“Patrick was astounding as Dracula,” said CSUN Theater alumni Lucy Maple. “He projected this aura that made him seem like his was seven feet all.”

Nicholas Hormann, who played “Dracula’s” other central character of Doctor Van Helsing was also a crowd favorite, receiving a standing ovation alongside Wenk-Wolff at the end of the production.

“Bram Stoker’s Dracula,” hosted by the VPAC, was a perfect example of cultured theater taking a creepy turn for the upcoming holiday.

“It was a suspenseful show, even though I knew the plot,” said Maddox. “I’d definitely come back to an L.A. Theatre Works show at the VPAC.”