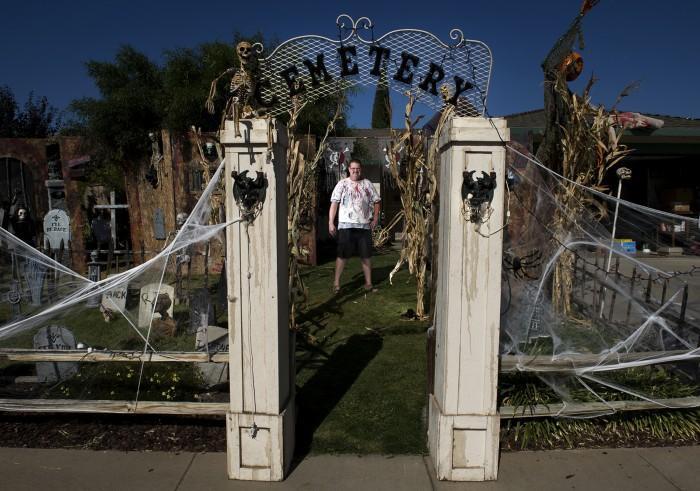 Dwayne Boulter poses for a portrait on Oct. 24, 2013 at his home in Solida, Calif. Boulter has been decorating his Salida yard for Halloween over the past sixteen years with many of his own original creations. (Andy Alfaro/Modesto Bee/TNS)

As Halloween rears its claws around the dark corners, talk of monsters and supernatural myths resurface to fuel our nightmares.

The classic monsters are vampires, werewolves and zombies and well-known myths include the hook-for-a-hand, the right-behind-stalker and the moving eyes.

Recently, the Internet has allowed for new supernatural legends to be made and spread.

Sites like 4chan, Creepypasta and Reddit dedicate pages to discussing myths and monsters. Forums are dedicated to debating which creature or myth is the scariest.

One of the most popular urban legend to surface was of Slender Man. In 2009, Eric Knudson created Slender Man, a thin, humanoid creature in a black suit with a round, ball face and sharp tentacles slithering off his body. Slender Man has since become a meme, often being the stuff of Creepypasta stories and slipping into real life pictures.

Tiptoeing behind is another urban legend that surfaced sometime in the late 1990s –the black-eyed children. Apart from soulless, fully black eyes, devoid of anything else besides black and a cold stare, the “Black-Eyed Children” myth is said to have these creature approach someone and ask for help. It is said that if the victim does anything to help these children, they’ll meet with a gruesome end – whatever that end is, is debatable.

Among the monsters is a urbane legend ritual, called the “Elevator Game.” The place of the myth’s origin is unknown, being somewhere in Asia, from Korea to China to Japan. It is a ritual that has a brave someone enter an elevator in a building with 10 floors and press the buttons in a sequence to travel to an alternate dimension. The “Elevator Game” is popular with daredevils who claim to have completed the ritual, saw the other side, and returned to tell the tale.

Michael Prince, 20-year-old CSUN Japanese major, wasn’t so scared of the Elevator Game as he was interested at the thought of it.

“It all depends on what the dimension is like,” Prince said. “I mean you could go to a really cool dimension, potentially.”