Matadors hold on for victory on Senior Day 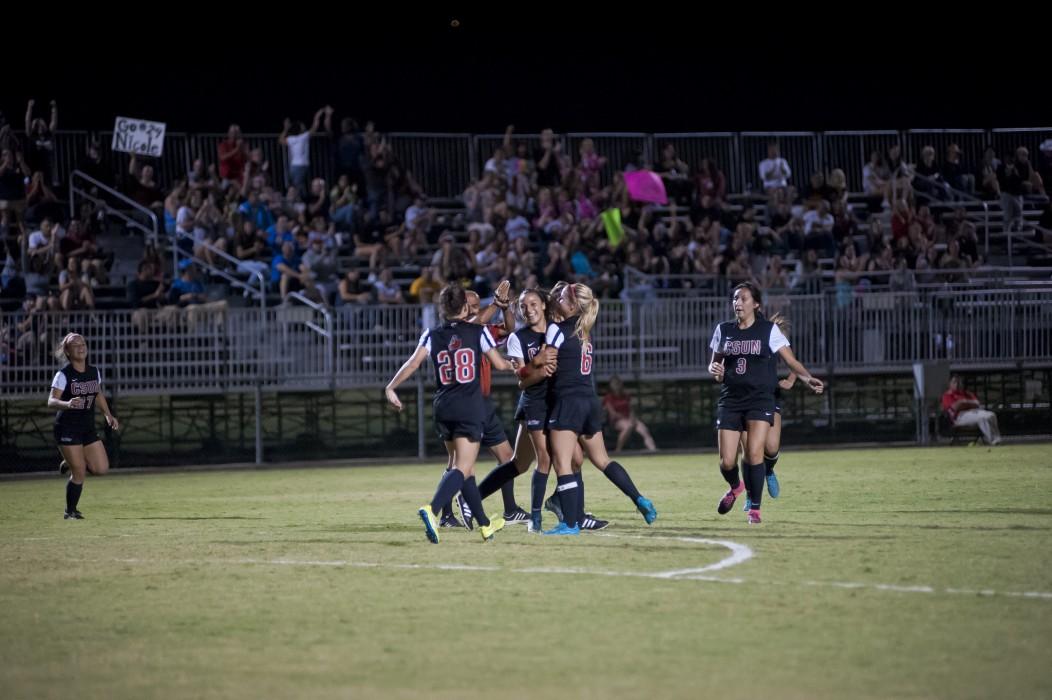 The Matadors sent off their seniors with a thrilling 4-3 win on Sunday, Nov. 1. Photo credit: David Hawkins

As the curtain closed on the Matadors season, it was only fitting that their final game summed up how the season went.

After taking a 2-0 lead in the first half, and increasing it 3-0 in the opening minutes of the second half, the CSUN women’s soccer team nearly gave up the game before holding on for a 4-3 overtime win over the visiting University of California, Santa Barbara Gauchos on Sunday.

“We did some phenomenal things, but we could not sustain it,” said Matador Head Coach Keith West.

Just like in the game, the Matadors were not able to maintain their early season momentum and they faltered down the stretch causing them to miss the Big West Tournament in what was once seen as a promising season.

Although the Matadors postseason hopes had already been decided after the Oct. 29 loss to the University of California, Riverside Highlanders, they still had something to play for as they honored their departing seniors.

Dickson would score the first goal of the game off a header at the three minute mark. It was her second goal of the season.

“I just focused on practicing and getting better and that is how I kept everything the past four years,” Dickson said. “My last year was my best year yet.”

The Matadors second goal would come at the 12-minute mark from junior midfielder Kourtney Kutscher off an assist from Preston.

The Matadors defense started out strong, kept the Gauchos off the scoreboard and held them to only three shots compared to CSUN’s seven. Tafoya also recorded two saves in the half.

As the game entered the second half, the Matadors looked like they were about to run away with the match.

Moskal was able to convert on a penalty kick at the 47-minute mark to give the Matadors a commanding 3-0 lead.

And just like the season, it was then that the game started to go downhill.

The Matadors defense let up and Gaucho freshman midfielder Maddie Gibson kicked in two goals, her only two of the season, within seven minutes of each other. The tying goal came at the 68-minute mark from Gaucho sophomore forward Amanda Ball.

The Gauchos had become the aggressor and it showed as they outshot the Matadors 12-4 in the second half.

CSUN was not able to get a good look at the net and after Tafoya made a few more key saves. The game went into overtime where Kutscher was able to convert a penalty kick for the winning goal.

“The way we played the first half I felt like that is who I know we are,” West said. “In the second half we made some mistakes and had some letdowns and that is how the season has gone.”

Despite allowing the Gauchos to get back into the game, the Matadors were able to end their season on a high note and give their departing seniors a win.

“It has definitely been the most amazing experience I have ever been a part of,” said Moskal. “Overall I have learned so much and grown so much as person and as a player.”