Women’s basketball looks to carve out their own identity 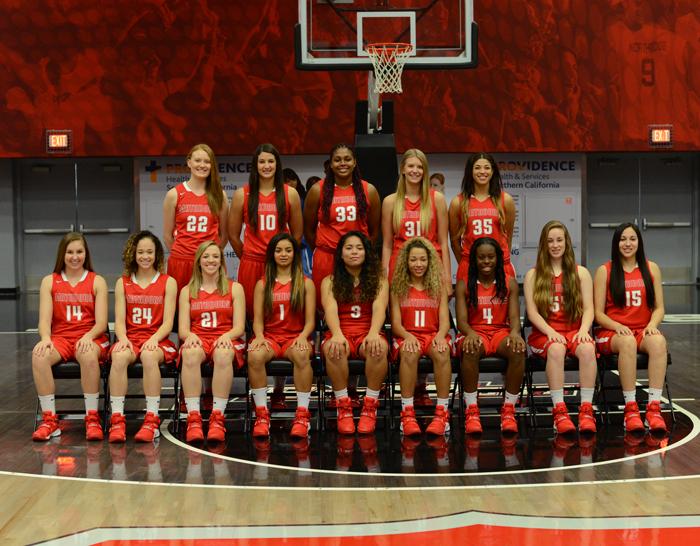 When you have won two Big West Conference Championships and made back to back appearances in the NCAA tournament, blocking out that success might seem difficult to do.

But that’s exactly what the CSUN women’s basketball team is hoping to accomplish in anticipation of the upcoming season.

The team will have a bit of a different look as all five starters from last season’s team graduated. There are eight new faces on the team, including five freshman.

The Matadors will have a tough act to follow as last season’s team posted a school-record in wins with 23. They finished 23-10 overall and came in to the NCAA tournament as a 13th seed before falling to Stanford University in the first round.

In an preseason media poll that was released earlier this week, the Matadors were picked to finish fourth overall in the conference. Taking the top honors was the University of Hawaii who the Matadors defeated last season in route to clinching their second conference championship and automatic tournament bid.

Although the Matadors have had a lot of past success, head coach Jason Flowers is approaching this season not as a continuation of previous years, but as a brand new journey.

“We cannot focus on six months ago and what happened with the previous team,” Flowers said. “Our deal is all about working as hard as we can possibly work today in order for us to become the best team we can be.”

Much of the leadership this season is going to fall on two returning players, senior forward Jasmine Johnson and junior guard Emily Cole.

According to Flowers, their presence will go a long way toward keeping the team together and helping to integrate the younger players.

“It will be key to whether we are successful or not,” he said.

Johnson, who is the lone senior and had her best season as a junior, is looking forward to expanding her role on the team.

“I always have to show up everyday and lead the team by example,” she said. “I see it as an opportunity and I am very grateful to be in this position.”

While the Matadors are not focusing on past achievements, Johnson believes this is a talented group who can have a very strong season despite being very young.

“The more we practice and get better at weaknesses, age does not matter,” she said. “As long as you put in the work and really want it, you can get whatever you put your head into.”

Cole, who was the top three point shooter on last season’s team, is also relishing the opportunity to help Johnson guide the new players.

“We have to let them know they are not alone.” she said. “When times get tough you are going to get through it.”

In addition to the freshmen, three of the newcomers are transfers from other colleges.

Coming in as sophomores are forward Jordan Smith from Casper College in Wyoming and guard Vanessa Garner from New Mexico State University.

Joining Cole as one of only two juniors is Lindsay Neuner who transferred from Moorpark Community College. Neuner is looking forward to Division 1 competition and hopes she can contribute immediately.

“Hopefully my defense can impact the team, I love defense.” she said.

Although she has only played at the community college level, Neuner hopes she can relate to the incoming freshman and use her experience as a former team captain at Moorpark.

“I have been in their shoes and hopefully I can help them out in any area.” she said.

While the team will need some contributions from the new players, Flowers believes it is still too early to determine who will fit into what role.

“That will take care of itself as the season plays out,” he said. “Roles will develop and people will have to step into them or accept them.”

Both Cole and Johnson know that aside from their leadership, they will be counted on to expand their roles on the court as well.

Cole is looking to improve her play-making skills so she can attack defenses in other ways.

“I need to become more than just a shooter because that’s easier to defend,” she said. “I need to help my teammates out more by making it harder on the defense so I can create other opportunities for other players.”

Johnson hopes to increase her versatility both offensively and defensively.

She wants to be a really good defense player for her team.

“I think that will be important this year,” Johnson said. “And attacking on the perimeter as well.”

The Matadors will begin the season Friday, Nov. 6 at home against The Masters College at 7 p.m.