Tessa Boagni ready for an increased role this season 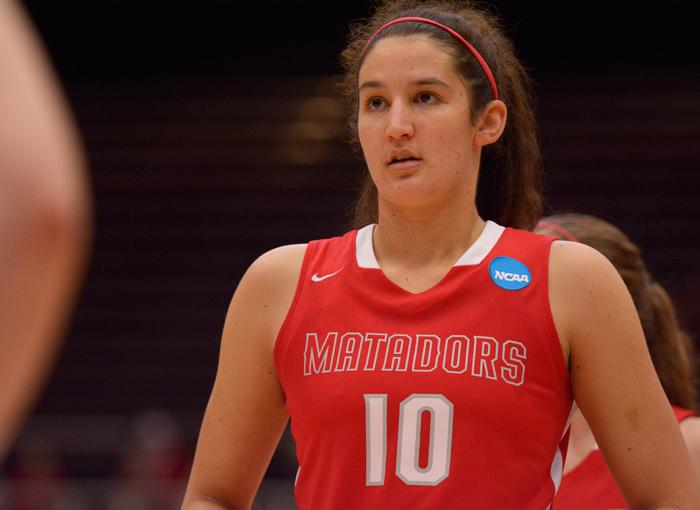 Standing at 6 feet 2 inches, sophomore center Tessa Boagni already comes in as one of the most experienced players on a CSUN basketball team that is looking for a third straight Big West Conference championship.

Boagni comes into this season looking to carve out her own niche in her expanded role in the frontcourt after playing behind Camille Mahlknecht last season.

“When I first graduated from high school I didn’t expect to be where I am today,” Boagni said. “Looking back I was talented but pretty lazy and they have worked me to the very ends of my limits and for that I’m thankful.”

She said she is getting better but she still has more room to improve.

In her freshman year, she averaged 5.4 points, 4.1 rebounds and 0.5 blocks per game, which earned her a spot on the conference’s all-freshman team.

With Mahlknecht gone, Boagni knows that she will need to step up in a similar fashion.

“I feel like there’s a a big spot that needs to be filled,” she said. “Camille was an amazing forward and she was the best one CSUN has had, so I don’t know if I’m trying to fill that or…make my own kind [of] role on the team.”

She said she hopes to fill some of the gaps that Mahlknecht left.

However, Flowers isn’t looking to dwell in past success or individual players to form this new team’s identity.

Flowers said the team’s success in the past few years are from people accepting their roles and thriving in them.

Boagni capitalized on all the lessons she learned at CSUN, and parlayed that into a spot on the New Zealand national team.

Like her mother Jane McMeeken and older sister Kate McMeeken-Ruscoe before her, Boagni played on the national team.

“The feeling of first putting the jersey on and knowing that my mom…and my sister played in the same jersey, it was pretty awesome,” she said.

The New Zealand basketball jersey has a fern on the left side of it.

“You see this fern and you feel a lot of pride,” Boagni said.

Although Boagni was coy about her achievements, but those around her weren’t as surprised.

“I was really proud of her for making the team and I knew that she was going to make it,” said sophomore forward Caroline Gilling. “I tried to encourage her a lot so she knew I believed in her.”

Boagni was the youngest member of the team with all veterans.

“They were really good and most of the older players played with my sister,” she said. “I was like a little sister to them.”

Boagni said the players were professional and helped her.

“They showed you what international basketball,” she said. ‘It was a really good experience.”

The team traveled to Taiwan and Australia for multiple contests.

Boagni said she didn’t think she performed well in the games.

“It was a whole other style of game, especially playing against some of the Asian teams,” she said. “They’re just so fast and so quick.”

She said she is glad she had a chance to gain international basketball experience.

She also wants to utilize her international experience with CSUN.

Boagni said her mentality now is to dominate.

“I want to dominate the rebounds, defensively and offensive,” she said. “I want to have a big impact on the team, especially since we’re so young and I’m considered one of the more experienced players.”

While at Christchurch Girls’ High School in New Zealand, Boagni was named the country’s secondary school national MVP for basketball and volleyball.

She led her school basketball team to a national championship in 2013.

“In high school, my role was always a very dominant role within the team because I was always the biggest player and the most experienced,” Boagni said. “Last year, obviously, my role was coming off the bench and giving Millie [Camille] a break, but this year I feel like I’m starting to go back to my high school role in being a bigger part of the team.”

Despite winning back-to-back Big West championships, CSUN is predicted to finish in fourth place in the Big West, according a preseason poll, which is something that Boagni doesn’t envision happening.

“We’re looking for a three-peat and to win a game in the NCAA Tournament,” she said. “That’s definitely possible with the team we have.”

Boagni said the team is talented and has the potential.

She said the team’s ultimate goal is to win the first round of the NCAA Tournament, which she thinks is within reach.

For the Matadors to achieve those lofty goals, the three captains Cole, Johnson and Boagni will need to take increased leadership responsibilities this season.

“This year I feel like the locker room is louder and a bit more bubbly,” Boagni said. “There’s so many new people but it’s crazy how fast we’ve all bonded.”

She said the team has so many different personalities that compliment each other.

With the season looming, it’s apparent that Boagni’s production and growth will be pivotal to CSUN’s quest for a third consecutive Big West championship.