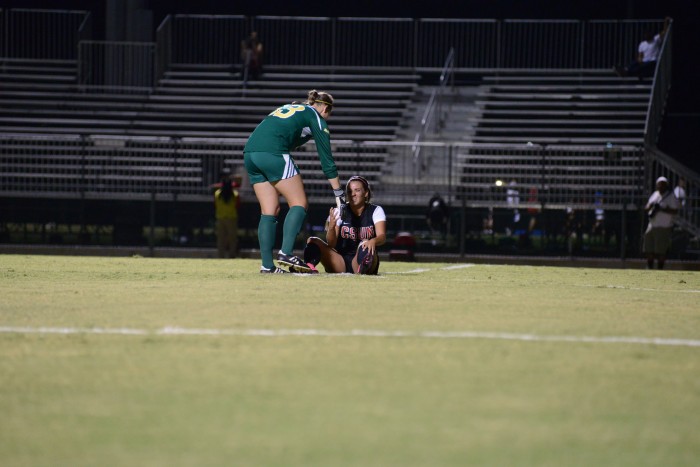 The Matadors went 1-3 in their last four games, costing them a spot in the postseason. Photo credit: Alejandro Aranda

After what started out as a promising season, the CSUN women’s soccer team hit a slump at the worst time.

They ended the season a far cry from the team that had a five game winning streak back in September and looked like a contender in the Big West Conference.

Although they were able to give their departing seniors a proper send off with a 4-3 win in Sunday’s final game of the season, it was a three game losing streak right before that sealed the Matadors fate.

They were eliminated from postseason tournament play after dropping a must win game, 1-0, against the University of California, Riverside Highlanders on Oct. 29.

According to CSUN head coach Keith West, consistency was the biggest issue all season long.

Once conference play began in early October, the Matadors were never able to regain their early season momentum and consistency that they needed to make a postseason run.

As one of the longest tenured players on the team, senior midfielder Tabatha Dickson had seen this story play out before.

“It happened last season too. We come in really strong and just had a couple tough games in the middle of the season,” said Dickson. “We worked really hard and we could have gotten wins but it just did not work out for us.”

Some of those tough games this year were due to the overall strength of the conference. Six of the nine teams in the Big West finished with a winning record.

While UC Riverside clinched the fourth and final spot in the conference tournament, the Matadors and the University of California, Davis Aggies, who finished fifth and sixth respectively, were right on their heels.

“Our conference is extremely competitive, everyone is really talented,” said senior defender Kendall Moskal after Sunday’s game. “The four teams that made the tournament deserved it. Whoever made it would have deserved it.”

Also playing a factor in the Matadors inconsistency were injuries. With a few players in and out of the lineup with injury woes, other players were needed to help fill the void.

“Every team faces injury but we had a lot this year,” said Moskal after Sunday’s game. “We had to call upon a lot of younger girls to play on short notice and make an impact.”

Despite the way the season ended, Moskal was proud of the contributions made by the younger players.

“Overall we played well with whoever was on the field,” said Moskal. “The lineup was pretty inconsistent but we made the most of it.”

While the season did not end the way the Matadors hoped it would, there were still some positives to look back on.

Anchoring the defense was senior goalkeeper Cynthia Tafoya who finished fourth in the conference in saves with 60. She made history of her own this season, moving into third place in school history in most career shutouts with 10.

The highlights of the season along with the positive and upbeat personality of the team was what kept them together and afloat even as the season slipped away.

“As far as the character and attitude of the group, it is just unbelievable,” said West. “I always say next year is brighter and I’m excited for the kids we have returning and the kids coming in and just getting back to training again in the spring.”