Comikaze returns to L.A. with more costumes and fun 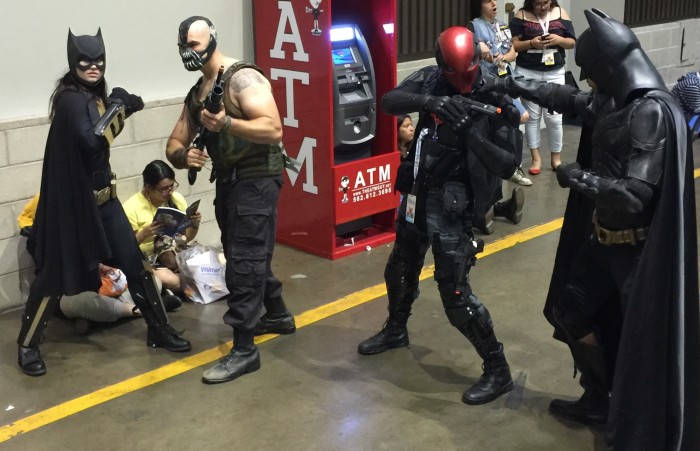 At Stan Lee's Comikaze a group of cosplayers dress up as the "Bat Family." Photo credit: Danny Arriaza

Batmen, Deadpools, and Boba Fetts as far as the eye can see – that is just some of the few characters that took over the L.A. Convention Center every year during Stan Lee’s Comikaze. The event is billed as a “comic, gaming, horror, sci-fi, anime, fantasy, and pop culture expo” but the main focus is on comics and memorabilia related to the industry.

The event reflects much of the city it is hosted in, especially in one aspect: the traffic. There is always traffic outside of the venue but with the sheer amount of people inside it seems like you are still driving through the streets of LA when trying to move along the halls of exhibitors. At times, it’s hard to stop at a booth that piques interest because of the herd mentality that develops. The event may be getting too big for the size of the convention center, but there is so much to see and explore, the crowded feeling almost evaporates.

There were an innumerable amount of exhibitors selling an extensive variety of goods, from fan art to paintings and even custom made wood pens. One exhibitor, Crude Inc., specialized in stencil paintings on vinyl records of everything from musicians to Stormtroopers. Then there are a variety of weapons from our favorite characters such as swords, bows, etc. Some weapons were made from foam, but the more expensive items were made of stainless steel. One exhibitor had non-firing guns imported from Spain. Many artists used well-beloved characters to draw in people who had the chance to exhibit their own original artwork.

Art was a prominent part of the event as many booths had some kind of art ranging from pieces that visitors glance past, to others which simply stun by the sheer detail and intricacy displayed. Almost all is fan-art based on comic or video game characters but some are blended with things they are not normally associated with to surprising and enjoyable effect. For example, one piece blended Daffy and Donald Duck with an iconic scene from Quentin Tarantino’s Pulp Fiction to create Duck Fiction. But the amount of art paled in comparison to the dominance displayed by comics.

There were hundreds of thousands of comics for sale. Stores such as Mile High Comics had an enormous booth with a huge wall of just variant covers and drawers upon drawers filled with new and semi-old comics. Hours could be spent searching through those drawers looking for the missing piece of a collection or a book that sparks fond memories of days gone bye. But if modern comics are not on the schedule many retailers had booths selling/buying Golden and Silver age comics.

Comikaze is Los Angeles’ answer to the behemoth of Comic-Con, but it never reaches the heights of that famed mecca. Nevertheless, Comikaze is a lot less expensive, closer to CSUN, and is a fun-time for everyone.