Substantial security at HARD Day of the Dead 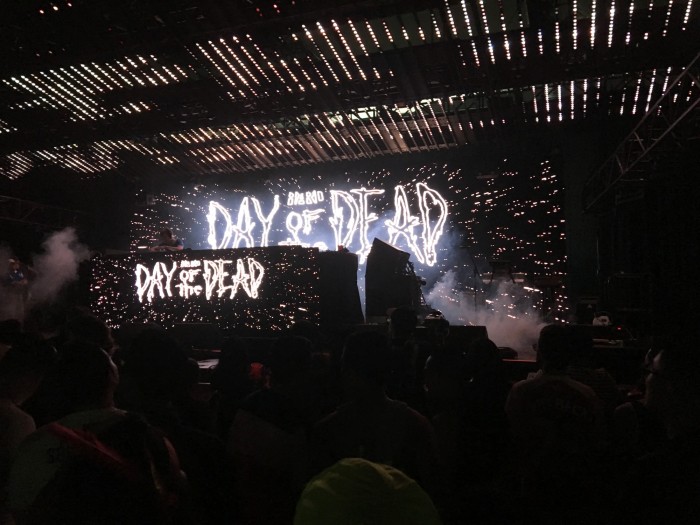 HARD Day of the Dead was a two-day festival filled with music, dancing and mischief from attendees.

On both days of the festival, an estimated 300 guests were taken into custody, according to the Pomona police department.

One man was handcuffed outside a stage during the first day, while wearing a shirt that said “hugs not drugs.”

Sights like this were indicative of how substantial the security was at the event, which was beefed up from previous HARD events.

Following the drug-related deaths of two teenagers from “HARD Summer” this year, the age-limit was raised from 18-and-over to 21-and-over.

The security was expected to search patrons more thoroughly, which they did by asking people to take off their shoes, hats and making them reenact the same facial expression as on their driver’s license.

“What I didn’t enjoy was day one’s long wait to get in and having to take off my stinky shoes,” said Allan Huerta who has been to every HARD Day of the Dead that has taken place.

There were more law enforcement and medical staff on site to promote a safe environment. Parking was free this time around, which saved people from spending $20 extra per day.

“I love how this atmosphere feels more intimate and not as crowded like HARD Summer,” said Ashley Agahan, San Diego native. “The food selection is awesome and I love how I can walk around with a beer now that it’s 21 and over. I like how we got all got Uber cards to get here. It just shows how HARD takes care of their people.”

Huerta expected more from Skrillex because when he saw him two years ago at the LA Historic Park, that was his favorite set.

“For it being more of an EDM festival, my favorite sets were from Juicy J and Future,” said Huerta. “They killed it.”

As one attendee puts it, Day of the Dead was an experience to remember.

“HARD was an amazing atmosphere with world class talent,” said Benjamin Garduno,who drove all the way from San Diego to be with his friends from Los Angeles. “Epic laser shows and plenty of alcohol to enhance the experience. I’d give it a 10/10 and I would definitely go again next year”