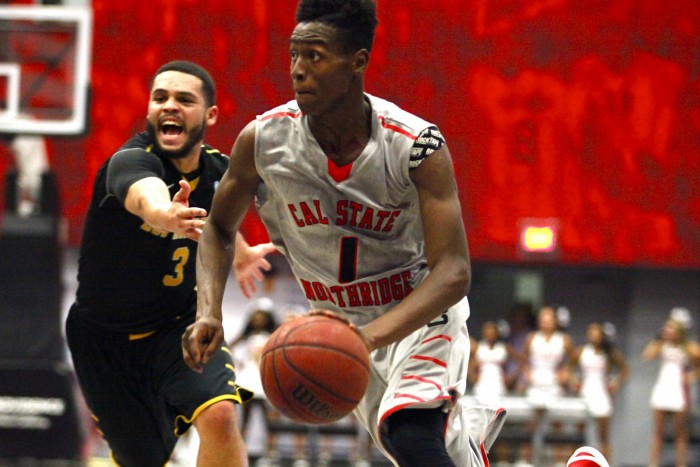 Freshmen Tavrion Dawson and Micheal Warren combined for 26 points, as CSUN came back in the second half and defeated the California State University, Los Angeles Golden Eagles 54-50 at the Matadome on Thursday, Nov. 5

“We’re not supposed to lose to them,” said Theus. “And even though it was close, we did what we had to do to win the game, and that’s really all that matters.”

Although it was billed as an exhibition game that the Matadors were pegged to win with relative ease, they had their hands full against the Golden Eagles—a division II program—early on, as they trailed CSULA 28-23 at halftime.

The Matadors, who started three freshmen—Dawson, Warren and guard Jason Richardson—played too fast, committing 14 turnovers to the Golden Eagles’ nine in the first half.

CSUN was forced to rely on young players as upperclass guards Aaron Parks, Landon Drew and Jerron Wilbut were all unavailable.

However, the turnover issues were made worse considering that senior Tre Hale-Edmerson led the team with five in the first half.

One of the freshmen did excel in the first half, though. Dawson utilized his length and versatility to score nine points on 4-of-6 shooting, including 1-of-2 from the 3-point line.

“He’s gonna get minutes, and there’s no way he’s not going to get minutes, so you can be patient,” said Theus of Dawson. “But I thought he was aggressive.”

Despite Dawson’s scoring and the Matadors shooting eight percent better from the field, turnovers and missed free throws were hampered their attack in the opening half.

Coming out of the locker room, things got worse for CSUN, as they continued to struggle to take care of the ball, as CSULA extended their lead to 11 at the 16:13 mark of the second half.

With the Matadors trailing and in need of some scoring, Dawson responded.

The six-foot-eight forward answered the Golden Eagles’ score with a basket inside plus a foul, where he would convert the ensuing free throw.

“We needed something that to spark the team,” said Dawson. “So I knew if I got the and-one, it would spark the team and get [us] going.”

He then followed that up with a tip-in that cut the deficit to six points.

The pair of Dawson baskets proved to be significant, as they sparked a 9-0 Matadors run that put them within two points of the Golden Eagles with 12 minutes to play.

Although CSULA would briefly push their lead back up to five, the Matadors were able to recapture the lead behind a pair of baskets by Hale-Edmerson to give them a 45-40 lead with 8:31 remaining.

CSULA wouldn’t lay down though, as they took back the lead thanks to a lay-up by senior guard Joshua Munzon. The lead was short-lived as a quick outlet pass resulted in a thunderous one-handed dunk by Warren.

The teams went back and forth for the next five minutes, as the lead changed hands four times in that span.

CSUN was able to seal the game due in large part to Warren who hit the go-ahead jump shot with 1:06 remaining, and a pair of free throws 46 seconds later to give the Matadors a three point lead and seal the victory.

“I didn’t think he played that great in the first half, but in the second half, he turned it up a little bit,” said Theus, regarding Warren. “But that’s what you expect out of him. He’s a very good basketball player, who is going to be a great player in this conference.”

The fashion in which the Matadors picked up the win may not have been ideal, but this matchup demonstrated not only the challenges of this young team, but also its potential moving forward.

“I saw fight,” said Theus. “I saw guys that when got down, turned it up. I see our athleticism, I see what we can become. It’s just going to take a while.”