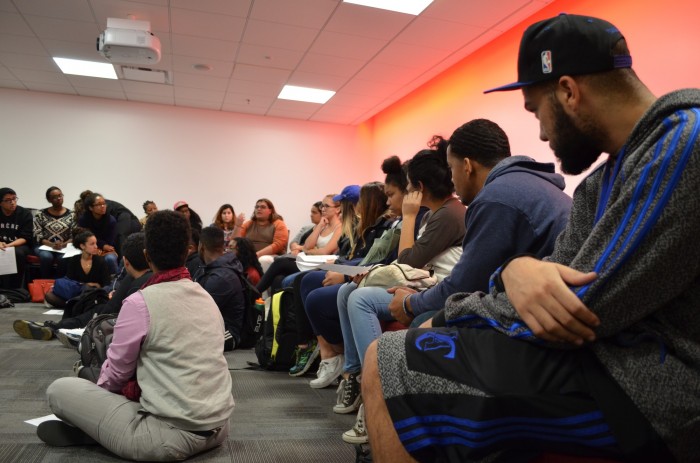 The first Black Lives Matter Symposium and Workshop received overwhelming support as attendees filled the Flintridge Room to its capacity on Wednesday, Nov. 4 at 4 p.m.

The event was a collaboration between CSUN’s National Association of Black Journalists (NABJ) chapter and Civil Discourse and Social Change Initiative (CDSC) with the goal of educating individuals about what the Black Lives Matter (BLM) movement stood for and what it was about.

“We just know that the BLM movement has been an issue in the media for a really long time…,” said CSUN NABJ chapter President, Daisy Lightfoot “…So we thought it was really important to bring it to CSUN to help give a home like feel for our students. Because it becomes an issue when the university with the largest number of black students in the CSU system continues to be underserved.”

The conference began with a brief introduction and poems regarding racial justice and the BLM movement.

Toni Guinyard , NBC4 general assignment reporter and moderator of the BLM Symposium and Workshop, encouraged students to discuss issues that made them feel uncomfortable, regardless if their opinion clashes with one another.

“We all have a different perception because our realities are not the same,” said Guinyard. “My reality is not your reality and it shouldn’t be. Everyone doesn’t have to agree, it’s not in the rule book of being a human.”

According to Guinyard, the things society doesn’t want to discuss is what a majority of people have opinions for; which is reflective of what the world has been through.

The groups then talked about the importance of such a movement and how making a statement is crucial for change.

“We are trying to disrupt business as usual because people are getting killed,” Perkins said. “People see this and just go right back to their lives, but they need to remember what’s actually going on.”

Acknowledging the importance of your power and limitations was another important factor that was noted.

“It’s important to recognize that if you really want change you need to stop thinking that these important people are above approach,” said Ratcliff. “Don’t think that you can’t talk to the mayor, because you can. We have the power.”

Some students expressed their struggles in having uncomfortable conversations regarding controversial topics. CSUN Mass Communication student David Stamps explained his difficulty in having a conversation without others assuming his perspective.

After a series of questions, national reporter Wesley Lowery joined the conversation through a video call explaining the details of when BLM movement started.

“When I was interviewing protesters after the Michael Brown shooting, many weren’t even talking about him,” Lowery said. “They came out because of their own prior personal experiences where they felt [that] they were mistreated by police. Again and again, it became very apparent that it was the last straw for a community that felt neglected and abused. It was so much more than the current shooting or death.”

When the seminar came to an end, a large crowd of students remained, actively discussing the highlights of the event.

“I feel like I’ve gained more information and hope, because going to meetings like these give me an opportunity to discuss a lot of subjects my friends don’t like to talk about,” said CSUN Theatre major Taylaur Paige. “It also helps me learn ways to have these conversations with my friends in a way where they won’t get offended.”