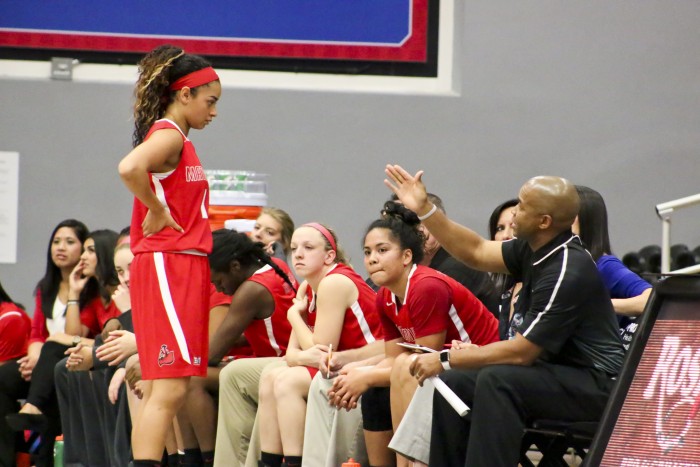 All young teams go through growing pains, and for the CSUN women’s basketball team, this season will have a lot of them.

The Matadors trailed by as many as 27 points before losing their exhibition game against the Master’s College Lady Mustangs, 81-57 on Friday night.

While the Matadors did show some positive signs, including a game high 19 points for freshman guard Claudia Ramos in her season debut, the game left them wondering what adjustments they need to make as they continue to grow together.

CSUN head coach Jason Flowers took responsibility for the loss, chalking it up to how well the team was prepared in the days leading up to the game.

“You cannot make adjustments when you are not giving maximum effort,” said Flowers. “That falls square on my shoulders, I take full responsibility for tonight.”

One area of concern in particular was on the defensive end of the court. The Matadors continually gave up open three point shots and the Lady Mustangs were able to convert on a scorching 50 percent from beyond the arc in the first half.

While they cooled off in the second half, the Lady Mustangs began to carve the Matadors up inside, routinely getting deep post position for easy looks at the basket.

“We have to develop a defensive mindset and a defensive mentality,” said Flowers. “Defense comes down to toughness. It is one thing to be able to score the basketball. Individually or as a group it is a completely different thing to do what it takes to become a really good defender and to be a good defensive group.”

The Matadors were outscored 38-26 in the paint and the Lady Mustangs shot about 44 percent from the field.

Despite appearing listless for most of the night, the Matadors showed some signs of life making two separate runs, one near the end of the first half and the other at the beginning of the second half.

Instrumental in those runs was Ramos who displayed a knack for finding seams in the defense and attacking the rim. She was able to score on several drives to the basket and got to the free throw line a game-high 12 times.

“I had the opportunity to drive a little bit to the basket, we were not making a lot of shots from the three point line,” said Ramos.

Following Ramos’ lead, the Matadors were most successful when they attacked the rim. Senior forward Jasmine Johnson showed nice confidence in the post until she got into foul trouble.

“We were not really applying what our coaches were telling us,” said Johnson. “We were not boxing out bodies and they were getting a lot of offensive boards.”

Moving forward, Flowers believes what will be key is how long it takes the team to come together.

“This is all part of the process. We talk everyday about how you have to fail before you succeed,” said Flowers. “We definitely failed tonight and we will fail a lot more. Hopefully it will be a lot more in practice so we can succeed in games.”

The Matadors will officially begin their season on Friday Nov. 13 at home against Saint Mary’s University. Tipoff is scheduled for 2 p.m.