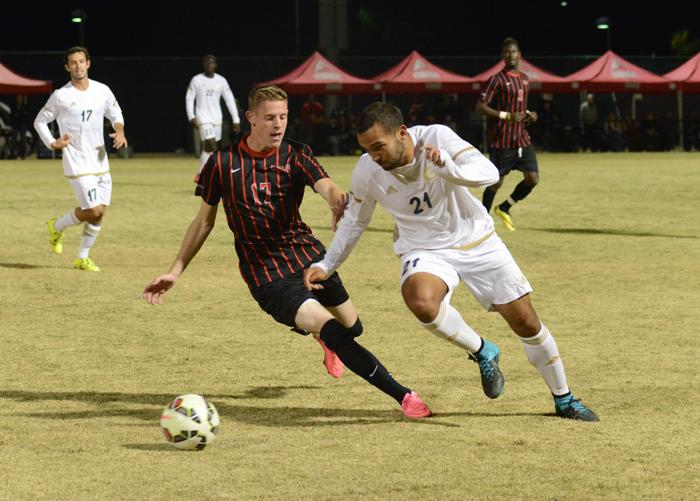 CSUN's Dean Wright tries to intersept the ball from Greg Salazar in the 2-1 loss versus UC Davis at Matador Field in Northridge, Calif., on Nov. 7, 2015. The UC Davis Aggies won the game on a golden goal in the first over time and advance to the next round by the final score of 2-1. (Alejandro Aranda / The Sundial)

It was one and done for the CSUN men’s soccer team’s postseason.

Despite a strong showing in the first round of the Big West Tournament, the Matadors’ season ended with a strike from UC Davis senior forward Matt Wiesenfarth in the 93rd minute to give the Aggies a 2-1 win on Saturday, Nov. 7.

“We got a little unfortunate at the end of the game,” said CSUN head coach Terry Davila on his side’s 2-1 defeat. “They capitalized on it.”

After a late-equalizer from CSUN sophomore striker Papi Diouf in the 88th minute that pushed the Matadors into extra time, Wiesenfarth darted toward the box evading two defenders and beat CSUN senior goalkeeper Adam Hobbs for the game-winner.

Diouf said it was one of those days where CSUN was just unlucky.

“We can play really good and lose, but you can play bad and win the game,” he said. “We just take it as a positive way and just go get ready and come back.”

Despite scoring the equalizer, Diouf had a handful of chances squandered. The striker totaled five shots and two on goal.

Wisenfarth needed only one shot – the game-winner.

“We just wanted to do better than this,” Diouf said about CSUN’s effort. “But everything happens for a reason.”

With the season ending, CSUN loses six seniors, including goalkeeper Hobbs and captain and Big West Defensive Player of the Year Trevor Morley.

“Hobbs stands with some of the best goalkeepers we ever had,” Davila said. “Morley has been part of our two championship teams…he’s a tremendous example to how you should be a student.”

Hobbs tallied three saves and sparked the play for the equalizing goal. UC Davis goalkeeper Kris Schultz bested Hobbs with four, but was instrumental in keeping the Aggies in the game.

“We didn’t execute as much as I liked on the offensive third,” Davila said.

The shot count was even at six apiece for both sides in the first half, but the Matadors created more chances and had more possession than the Aggies.

Davila said the positive is that Northridge created opportunities.

CSUN’s best chance in the half came from sophomore striker Jeremy Degraffenreidt when the forward went one-on-one against Schultz.

Junior midfielder Shane Steffes found Degraffenreidt with a chip pass over the back line, and the striker tried to chip the goalkeeper, but Schultz was able to deflect the ball for a corner-kick.

The Matadors stayed scoreless going into the second half.

It took only 49 seconds for UC Davis junior midfielder Connor Wills-Hong to open the scoring in the 73rd minute after coming on as a substitute. A series of defensive errors found the midfielder open to beat Hobbs for the first goal of the game, which ended the Aggies’ 380 minute scoreless drought that dated back to Oct. 21.

The Matadors fought for the equalizer, and with four minutes from time, Diouf found Turcios’ cross into the box for a header, but Schultz denied the striker.

“I think I’ve got everything I wanted,” Diouf said about the conclusion of his first season with CSUN.

Hobbs sent the ball into the box, which found Snedigar who headed the ball to Diouf, redeeming his earlier effort with the equalizer with 2:46 left in regulation.

“He’s got a tremendous heart and his future is bright,” Davila said about Diouf. “It’s just pure love and passion for the game and the guy has it. I’ll go to war with that guy.”

Extra time started off right for the Matadors, but Wiesenfarth sealed the deal with his strike.

With another season in the books for Davila, the coach wants one thing and one thing only.