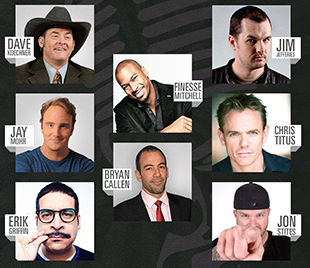 With an event just in time for the impending storm of fall semester finals, Associated Student’s (A.S.) Big Comedy on Nov. 10 should serve as a relaxing reprieve to CSUN students who are about to engross themselves in studying.

This year’s Big Comedy showcase will be held in the Valley Performing Arts Center (VPAC) featuring a roster of eight comedians for the night.

“This is the first time Big Comedy is at VPAC but not our first ‘big’ event at the VPAC,” said Kevin Mojaradi a representative from A.S. “It provides a chance for students who may otherwise not attend an event at the beautiful VPAC to go there for a fun and low-cost show.”

According to Mojaradi, Operation Comedy also serves to benefit veterans as well as providing entertainment to CSUN students.

“These artists are part of a comedy group Operation Comedy whose mission is to bring together our troops and their communities for nights of education, recognition and laughter,” said Mojaradi.

According to A.S., many of the previous Big Comedy events featured only a handful of comedians versus a showcase to fill the entire evening.

The upcoming Big Comedy event has garnered names like Jim Jeffries and Mad TV regular Bryan Callen for the night of comedy through the help of Operation Comedy’s booking platform.

“This is absolutely the best lineup for Big Comedy I’ve seen in years,” said CSUN English Grad student Jesse Gray. “In the past I might have skipped it but I’ll definitely be going after seeing Finesse Mitchell and Dave Koechner on the lineup.”

A.S. also stated that the two main goals of Big Comedy is to give students a night to relax from their academia as well as to bring attention to AS’ involvement with veterans in the CSUN community.

“We hope to provide the students with a fun night filled with laughs,” said Mojaradi. “Operations comedy also benefits the veterans and we would love to raise awareness of our CSUN vets and their families.”

Tickets for Big Comedy are available through the A.S. ticket office as well as the VPAC ticket office. Tickets are $5 for all CSUN students, faculty and staff.