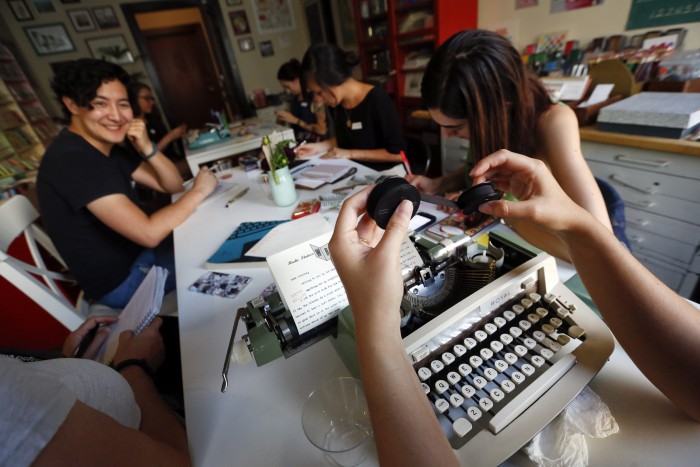 Margaret Haas, right, changes the ribbon on her typewriter as she types a letter to a penpal in Chicago during the monthly gathering of the L.A. Penpal Club at Paper Pastries Atelier in Los Angeles on Sept. 9, 2015. (Mel Melcon/Los Angeles Times/TNS)

Previously on “Why,” our protagonist is coping with death and is still trying to find closure. She recollects her last moments with her lost one in part two, so how will our main character cope with in this part of “Why.”

Whoever said time heals all wounds was a jackass. It’s been ten months. It been that long…wow. I miss you as much as I did the second day you left. I say the second because the first…I couldn’t even think or feel, all I saw was the water brimming in my fucking eyes and anger that you were taken.

But I’m not so angry and I don’t blame my God anymore or the world. I’m just mad sometimes because I remember that I can’t show you a new song or dance with you at a party or in the room when my favorite songs start playing. I can’t beg you to cook me something or bake your bread and have you sigh loudly but kiss my cheek and take your time doin it, but I loved that you were doin it anyway.

You were careless sometimes, a little hothead and a little too cynical on some things but you had a way with words, you were the most contradictory person I had met in my life. You were hopeful but realistic and a pessimist but an optimist at the right times. You were one of my rocks and now you’re just buried in the earth but now I try to remember that you’re an angel. You have to be baby. I pray and I talk to God, then I want to talk to you but I just can’t really do it just yet. Not yet.

I heard your song, ‘Signed, Sealed and Delivered’ by Stevie Wonder today. I heard your other one last week, ‘Lost Ones’ by J. Cole and ‘Nobody’s Perfect’ a month ago. I heard someone say they watched El Dorado with their little sibling and I got so mad because that’s your favorite kid movie too. Was. It was. I hate you today Mariah. I’m sorry for that, but I still love you. Oh God, how I love you.

I tried to watch Neighbors and American Gangster and even Grease-Grease Mariah!- this afternoon, but I couldn’t sit through the rest of the second movie and when I popped in Grease for twenty minutes, I could feel my eyes burning and I didn’t wanna fucking cry today so I turned it off and went outside to go running. Yeah baby, I tried to outrun the thought of you.

“Son, are you ready to eat, I can fix you something?” My dad is peering at me under his glasses like I might hit him or bolt.

“You certainly aren’t. I think you need to eat boy. You’re getting a little thin for a grown man.” I’m 21 now Mariah, you missed that too.

“I stopped working out for a little while, so I’m not as fit as I was a couple months ago.”

“You just finished track two months ago, that’s not an excuse.” He said everything calm and low like I was a stray animal that needed coaxing.

“I’ll eat more pops alright? I’m still healthy.” He nodded but I could see he didn’t believe me fully and I found that I kind of didn’t care but I did, because I knew he did.

“I’ll call your mom, she should be coming back from her trip next week.” Moms left for New Orleans for two weeks, visiting a really old friend from high school or college. You met her once baby, you said she smelled like jerky and strawberries, but that she had grit and you loved that.

You liked reading me poetry now and then. I couldn’t forget that, but truth be told, I did until now. We read some in class this morning and I clenched my fists and clenched my jaw for about fifteen minutes straight then remembered to relax. My buddy Lucas musta thought I was in pain or something. But he didn’t say a word. I love my friends for not asking me about all of it. I’d rather keep it quiet and try and get through the days. What would you have done if it were me?

I don’t miss you that much today.

That was a lie and we both know it.