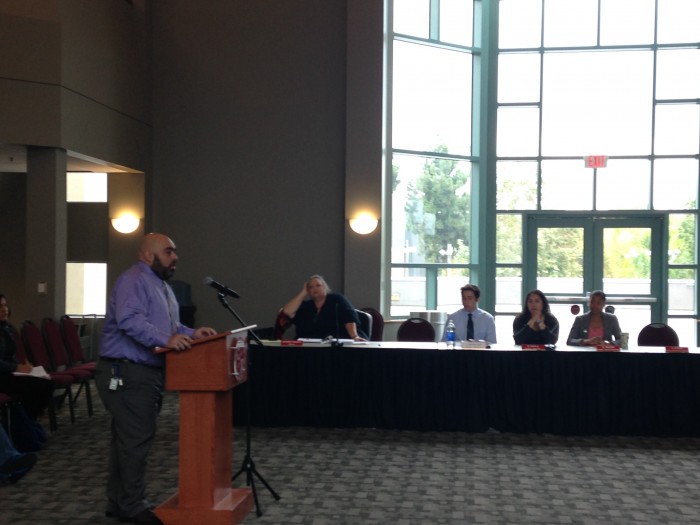 Augie Garibay, activities coordinator at the Matador Involvement Center, requests funding from A.S. before it allocated money to the MIC.

Associated Students continued its support for the Matador Involvement Center and new clubs on campus Monday as it allocated money for recruitment fairs and approved new organizations’ constitutions.

MIC is seeking funds for the spring Meet the Clubs Day said Augie Garibay, MIC activities coordinator. They want to provide a safe venue for students and the financial support would be used to advance students’ success, according to Garibay.

“When I made the request, I spoke with our vendors and came up with actual numbers so that I was holding myself accountable to what I would expect students to be held accountable to, and that is being good stewards of the money,” Garibay said.

The $7,265 allocated to the MIC for recruitment fairs will be used to provide canopies, tables and chairs. It will be used to make the event more accessible for students, Garibay said.

“This really moves us forward to have an organized, aesthetically pleasing, accessible and definitely visible space for students to learn about involvement through our clubs and organizations and campus projects,” he said.

MIC is one of two campus organizations to receive funding from A.S. at the meeting to further campus activities. A.S. also showed support for three new campus clubs that were seeking approval of their constitutions.

The Iraqi Student Association plans to raise awareness of the Iraqi culture on campus.

Let’s Get Physical represents the advancement of those involved in theatre to expand their potential for movement and non-verbal aspects of theatre.

The Graduate Student Association for Health Administration will promote networking, events and opportunities for students in that field.

Hedieh Hakakian, senator for the College of Social and Behavioral Sciences explained the contributions to campus that each club would provide, as well as the diverse representation available to students.

“Each club represents a different group of students on campus,” Hakakian said. “Having these clubs gives students an opportunity to feel welcome somewhere and feel like they belong somewhere. It will help them socially, networking and letting the whole school know who they are.”

A.S. continues its support for Matador Food Bank, which will provide food and securities to students and faculty on campus.

Senator Talin Yahiayan reported that A.S. is gathering information from other colleges and the area about food banks. A.S. is looking for a possible location on campus.

Tamus Glunz, the president and founder of Matador Food Bank, told meeting attendees that the first fundraiser will be Nov. 23, from 11 a.m. to 9 p.m. at Presto Pasta.

· A.S. will look into involvement with transportation projects and Metrolink availability for students, as recommended by Dr. Mike Kaiser of the CSUN Chemistry Department.

· Shushan Kapaktchian was appointed as Chair of Finance.