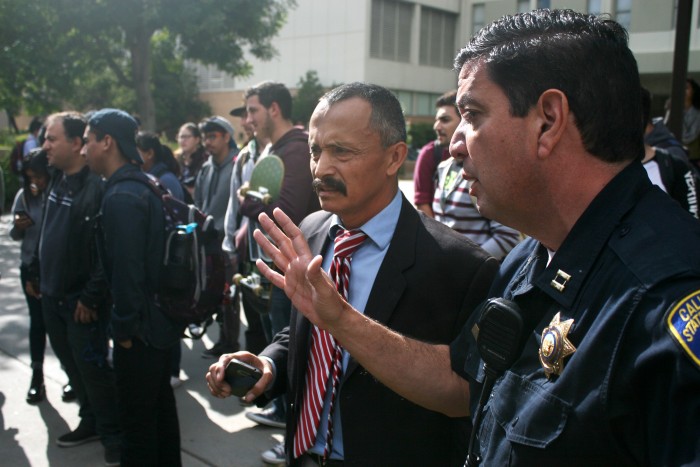 A student was detained at Sierra Quad after he tried to kiss a man demonstrating on campus.

Communication major Maximilian Britchta, 23, attempted to kiss the cheek of Ysidro Mendoza who came to campus to demonstrate against what he called the “sins of sodomy.”

Officers arrived at noon as a crowd of nearly 100 students surrounded Mendoza, criticizing his views on god, sin and homosexuality.

According to Police Captain Alfredo Fernandez, officers handcuffed Britchta for battery, but he was released soon after. Mendoza did not press charges.

“I didn’t think words were sufficient. I wanted to say something, but I didn’t have the words to say,” Britchta said. “So I went up to him and tried to kiss him.”

Police filed a report to the conduct office, so Britchta may face further disciplinary action from the university.

#CSUN student handcuffed after giving a kiss to a pastor pic.twitter.com/cRWQJajapi

“I kind of find it amusing because it’s funny to see how other people believe and that they think that they’re not trying to force their beliefs on everyone else when they obviously are,” said freshman kinesiology major Matthew Ursitti who witnessed the demonstration. “And when people try to shut them out, they immediately go to pushing more of their religion on them which would just rouse up the crowd even more.”

“He is trying to preach the bible by condemning people; he is going the wrong way about it,” Castrejon said. “For me, God is love.”

For sophomore Joey Kraiger, it was just entertainment.

“This is so good. It’s better than TV,” Kraiger said. “It’s entertaining, but nobody is taking him seriously.”