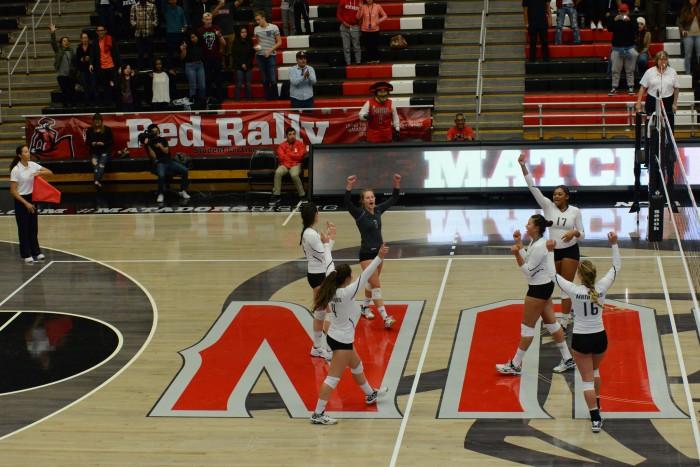 Although winless, the Titans applied early pressure in each set but the Matadors’ ability to stay composed helped them pull away and get the sweep.

The game had several ties and lead changes.

She said the team got nervous when Fullerton had a huge lead.

“Even if we have a huge lead, we get too comfortable,” Stinson said. “We just remained calm no matter if we were up or down and that helped us move forward.”

That calmness helped the Matadors edge the Titans in a game that had 15 ties and six lead changes.

Tied at four in the first set, the Matadors put together a seven point run to take a 11-4 lead, but the Titans would answer with a six point run to trail CSUN by a point.

The Matadors were able to regroup and went on a six point run to keep the Titans from coming back.

The second set was more competitive with six ties and three lead changes.

Leading most of the set, the Matadors saw their four-point lead dwindle down late when the Titans got within two at 18-16.

But as they did for the game, the Matadors would answer back and regain control.

Senior outside hitter Julie Haake said CSUN has been working all season to put teams away when the Matadors have the lead.

“That’s coming out with confidence and really using that to stay calm when the game is close and rely on our skills,” she said.

Haake had the second most kills for CSUN with nine. She also had three digs.

The Matadors were more efficient as they outhit the Titans by 22 percent, had eight fewer errors and had 15 more assists.

Junior setter Maddie Leiphardt was responsible for the majority of the Matadors assists as she had a game-high 39.

With one set away from winning, the Matadors had to withstand a final comeback attempt by the Titans but CSUN did not let up.

“I’m happy the way the team responded with this team,” said CSUN women’s volleyball head coach Jeff Stork “Being 0-12 in the conference, it’s pretty easy to overlook them and think about the next match, so I’m glad they performed well.”

With CSUN snapping its four-game losing streak, the team looks to end the season with some momentum with the final three games.

“It means a lot, I feel like we got our confidence back and we’re ready to take on Long Beach,” said freshman outside hitter Aeryn Owens.

The Matadors will seek their second straight win when they host the California State University, Long Beach on Friday, Nov. 13 at 7 p.m.