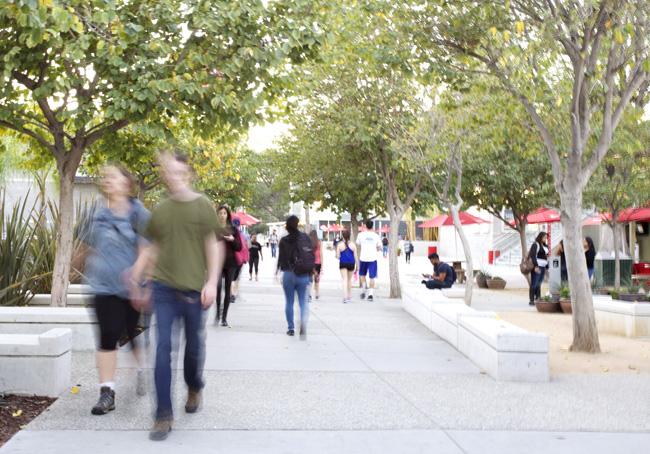 Students rush around the campus during the first week of school to attend classes, buy books and visit the Student Recreation Center. CSUN does not usually enroll a large number of students in the spring semester compared to the fall, which had the largest number of freshman in the campus' history. (File Photo / Loren Townsley / The Sundial)

Only what felt like a few weeks ago, we were complaining about how hot and disgusting it was, blissfully browsing instagram through class and wondering what was going on in the world. Now, finals are approaching but more importantly Thanksgiving, and winter break are at hand! A handful are graduating in a few weeks and the end is in sight! Stay strong! relax with some of the great things we got on this weeks calendar and take a breather before entering the “real world”.

British stand-up comedian Eugene Mirman, or as he’s better known as, Gene Belcher on the show “Bob’s Burgers” is touring. Joined by Derrick Brown and Josie Long, Mirman will be touring his new album.

Largo at the Coronet

With their smash hit “This Shit Will Fuck You Up,” Birthday Massacre has been rocking people for 15 years and have turned that song into their personality. The Canadian band’s strong pop influences has been rocking out and getting crowds to fall in love with them for years and this concert will be no different.

An annual event at CSUN celebrating Latin culture in their film and arts. There will be a host of literature, lectures, films, art, live performances and much more all through the end of the week and into Sunday. check the website provided for a full schedule of events!

This weekly screening of Welles’ films is considered by many to be his most intimate and best film, following a prince who faces a problem of loyalty to his father or to his friend.

With this year’s theme being “Challenging Inequities: Decolonizing Practices and Social Action” this two-day event focuses on “relational healing” from the world we live in now that so frequently puts everyone and anyone down.

Day 2 is FREE, check the schedule on the site for registration details

A two-act play with the first act taking place in British colonial Africa in the victorian era. Act 2 is set in a London park in 1979. This play is a comedy of gender and sexuality.

LACMA has put on some pretty crazy and unique events before and this is one that sticks out in recent history. The Rain Room is just that: a room filled with rain from above. The only odd thing is this controlled rain room has sensors that detect when a human enters. Where there is a person the rain is stopped around them. So you’ll be walking through a raining room while completely dry.

Everyone has an inner artists that’s yearning to get out. Grab a happy hour drink or some food and paint the entire time. Teachers will be at this bar to help teach step by step techniques or ignore them and draw whatever comes to mind. All art supplies are provided and unlimited.

There isn’t a college student who hasn’t at least heard of Moby Dick. The story of a fisherman hunting a white whale is now taking on a musical adaptation. Mixed with some stunning visuals and some romantic scores this will be a version of the classic novel that will entice even the most skeptical.

Continuing their annual music spree, Red Bull has a group of different artists every day for 30 days and this day is TV on the Radio and Gallant at the Theatre at Ace Hotel.

Rabbi Daniel Bouskila will be sharing about the rich history of Jews and of Spain and their connection through their descendants in time. He will also be going into fascinating stories of “crypto-Jews” who held on a preserved their culture and traditions over centuries.

The dance troupe BODYTRAFFIC will be performing their dance routine. Accompanied with some of the freshest jazz and smoothest dance moves one could see. Enjoy food and drinks while relaxing and watching some great moves.

Dr. Azza Basarudin’s book focuses on Muslim women activists in Malaysia, who are challenging Islamic authorities and their rules. She’ll be answering questions and discussing her book for those who wish to join.