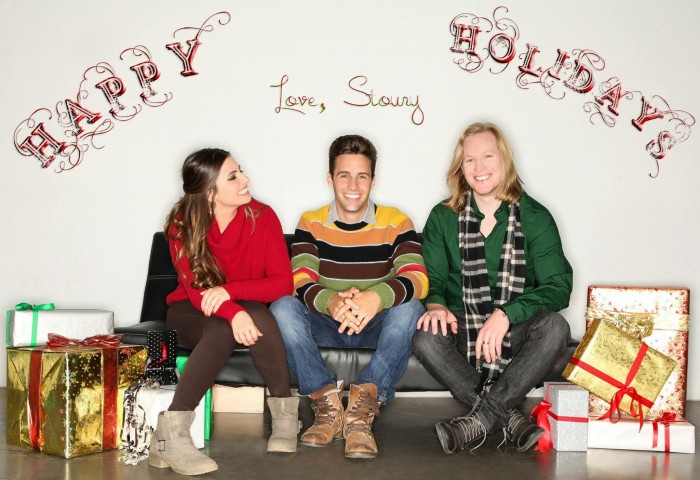 Nebraska, Levi June and Ryan in a holiday shoot for Stoury. Photo by: Steve Pomerants

Three CSUN alumni formed the band STOURY, I got a chance to sit down with them to find out theirs. Friends first and band mates second, 25-year-old Levi June, 24-year-old Nebraska and 26-year-old Ryan were all smiles and laughter while we sat down with chips and salsa in Nebraska and Levi’s living room in Sherman Oaks.

These locals of the San Fernando Valley formed their band after meeting through the CSUN music program. Their alternative pop sound is upbeat and refreshing. They recently celebrated the one-year anniversary of their first live performance.

When did you all meet each other? How did you meet?

Ryan: We all met in our Musicianship 1 class.

Nebraska: But I remember seeing Ryan skateboard inside the hallway to our class with the biggest smile on his face and I remember saying to myself, ‘I want to be friends with that guy.’ His vibe was just so positive.

Levi: Nebraska and I started hanging out after class and one night i was going over to her apartment to hang out and Ryan was heading out to leave after he was tutoring Nebraska. Instead of him heading out we all just ended up talking for hours.

I love your music video Unwind, it feels very true to your California roots, what was it like filming your latest video?

Nebraska: We filmed it in two days. We were in and out of all the different areas of L.A. & Malibu. It was the ‘good kind of tired’ that we all felt after that weekend.

Ryan: Christina Moffitino choreographed some killer segments and Jesse Josefsson directed and produced our video. Our vision was perfectly translated with their help.

Levi: We would do it again in a heartbeat.

What do each of you bring to the table when it comes to making your music?

Levi: We all have our own little roles, the writing has been pretty even. When we collaborate it gives the a song a whole new life. If i bring an idea to the table it’s because i know it’s meant to be a Stoury song.

Nebraska: we have no problem with ego when it comes to lyrical or musical choices between the three of us. I need their help as far as making the right musical choices. They’ll be honest with me. We allow ourselves to be vulnerable with each other. In those moments of humility and authenticity is when the song really makes head way. Ryan is definitely more of the engineer, although he’s written quite a few insanely catchy melodies.

Ryan: Lately though these two have been writing a lot. I haven’t really [written] a song in a long time. It’s all been engineering and recording, but that fits, I like doing that stuff, they might not like it.

Nebraska: The program as a whole gets compared on the top 25 music schools in the country I believe? Which is pretty spectacular seeing how reasonable it is. I think the individual teachers we had were fantastic. If anything, they allowed us to be way better musicians.

Levi: There is a healthy competition

Nebraska: It’s beautifully pretentious. You respect the people in your classes around you, there is a camaraderie there.

When did your band officially form?

Levi: Ryan and I were jamming first

Nebraska: We did a gig for Ryan’s friend in CTVA

Ryan: We were getting together and and playing music before that, but we didn’t start writing our first song until our last semester of college.

Nebraska: Yes, Spring 2013. I think that’s when we decided we were going to be a band.

What was the first song you wrote together?

Levi: “Things That You Say”

What is your favorite song you have written so far?

Nebraska: I love what “mess around” stands for. The lyrics are on point

Ryan: And that was the first song we got mixed back to us

Levi: That’s true, that was a big moment for us

Levi: I like the journey that “High Tide” took, it was the manifestation of parallel thinking. Ryan sat down in Guitar Center to play a riff and I was like, ‘dude I’ve written that same riff, and I’m going to show you what it sounds like. Let’s write a song about it.’ So we wrote a song and it worked.

Whats your favorite venue that you have played?

Nebraska: It has a great sound, a great vibe.

Nebraska: We are at Republic of Pie at least once a month now, so that’s been really cool.

Nebraska: It’s cool to see strangers go about their night, but then maybe one song or one note they really like gets them to sit down and listen. That’s the kind of reaction I am grateful for as a performer. Getting a stranger to take a seat, even for two minutes. We haven’t performed more than twice at the same venue because we want to make sure that our fans are getting to see us in a different place, and also that they get to see more of L.A.

How would you describe your music?

Levi: We are a good first date band

What’s a funny memory you guys have together as a band?

Everyone immediately starts laughing. There are maybe a few too many good memories they share. While they are a band they are also very good friends who have shared some hilarious memories.

Levi: It was when I was in music therapy and I had just finished my first session, I was really high on life. I realized we had a show to play and I thought I would have time to go home change and then go. I didn’t, but I went home anyways, so I was changing and I got a call – ‘hey we are going on in half an hour’ – so I had to get from Northridge to Hollywood, which is a half hour drive, but then I have to find parking, I have to pay the valet guy and find the place. Anyway, I get there right on time, Dani’s dad was waiting outside, he parked the car for me, I run inside and as soon as run inside I change my shirt, I grabbed my drum sticks and we went on.

Nebraska: I knew that day I was either going to hate him or love him,

Levi: We put a good show on, I remember that rush, it was a a fun day.

Nebraska: One more, we were trying to get through a Christmas song, and just couldn’t do it for the life of us. So the Youtube video just ended up just being a blooper clip.

Click the link below to watch their blooper reel.

Nebraska: Levi, at the last show, said something under his breath to me that he knows I will think is hilarious. I decided to ad-lib differently for one song and one of the notes was really high. I wasn’t expecting that to come out and they weren’t expecting it, so after the song was over Levi just leans over and goes “how high was that note?” and I lost it. We are on stage and I started the next song laughing so hard, literally him saying that that was exactly what I was saying in my head, like dammit that was a high note. It was embarrassing, but his face I’ll never forget.

Has living in the valley influenced your sound?

Nebraska: It has influenced some writing choices.

Levi: Being an artist its great to live in the valley because it’s a lot quieter here. Its harder to relax in the heart of L.A., this band finds tranquility outside a hectic city and allows that to inspire their relaxed lifestyle.

Nebraska: I’d rather be the music that someone wants to roll their windows down and play loudly in their car to get them in a better mood.

Don’t miss out on their next live performance on Saturday, Nov. 21 at Bar 20 on Sunset.