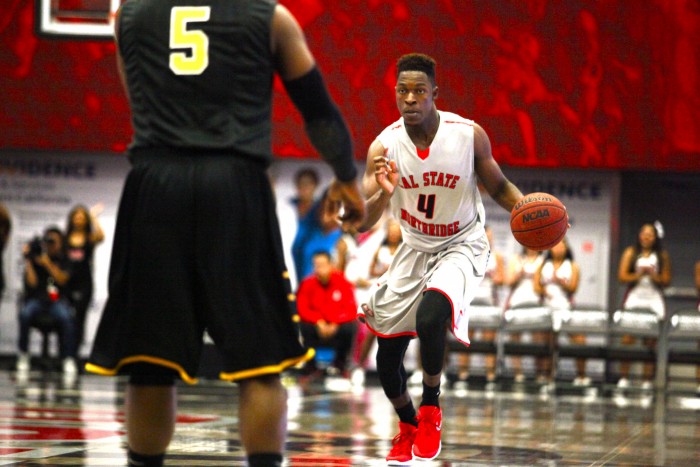 The Matadors will travel to DeKalb, Ill. this weekend for the Northern Illinois Showcase.

CSUN is coming off of a 54-50 victory on Nov. 5 against the Division II California State University, Los Angeles Golden Eagles in their only exhibition matchup of the season.

Against the Golden Eagles, the Matadors were careless with the ball, which may have been a product of their reliance on freshmen that was a result of the unavailability of upperclass guards Jerron Wilbut, Aaron Parks and Landon Drew.

Although CSUN men’s basketball head coach Reggie Theus was hopeful that Drew would return from a foot injury this weekend, Parks and Wilbut’s status are unclear because of a violation of team and university policy.

“I’m actually hoping for our first game in Illinois,” Theus said, when asked about a timetable for Drew’s return.

Luckily for the Matadors, two of the three teams they will face in Illinois finished under .500 last season, with the University of South Dakota barely finishing above that mark at 17-16.

But for CSUN—who finished under .500 last season as well—to have any success, they will need freshmen Micheal Warren and Tavrion Dawson to perform in similar fashion when they went up against Cal State L.A.

In the exhibition, Dawson was persistent, grabbing 10 rebounds in addition to his 14 points, while Warren alternated between guard spots en route to 12 points and four rebounds.

But for Dawson and Warren to maximize their opportunities, senior forward Tre Hale-Edmerson will be integral in orchestrating the defense and offense, especially if Drew is not able to play.

The Northern Illinois Showcase will be an intriguing case study on how well Theus can integrate young players into his system and in the team.

There will be six players on the active roster who may see their first minutes in a Division I college basketball game this weekend.

CSUN’s first game will be against the Northern Illinois University Huskies at the Convocation Center on Friday, Nov. 13 at 5 p.m.